People chose many different ways to prepare, some just ‘get up & go’ whilst others ‘procrastinate for so long’ they never leave. There is no right or wrong way.

Dans preparation;
Don’t let anyone tell you giving everything up and preparing to travel is easy. Maybe it is for some, but not me even though I understand that planning and preparing in detail leads to achievement.

10 years ago I knew I would be travelling when my kids were old enough for me to leave with them being able to fend for themselves by one degree or another, and it was 2 – 3 years ago I decided my mode of transport would be a motorbike.

My first detailed introduction into the world of overland motorbike travel was the website ‘Horizons Unlimited’ where I gathered much initial information, this lead to me going to HUBB in Ripley, Yorkshire in 2012 which achieved exactly what it sets out to do, it inspired, informed and connected me with people and the seed of an idea started to grow. I was on a journey which had a ‘definite destination’ and I wasn’t about to get off!

I continued saving and worked out much of the detail, which bike, do I camp or use hostels, which countries, the list goes on but the majority of decisions were made prior to 6 months before leaving.

The decision to ride a BMW F650GS Dakar was heavily influenced by John Duxbury who I was introduced to about 9 months before leaving, John spoke with passion about the bike and why he recommended It. In September 2013 I journeyed to Yorkshire to buy a 2006 model and rode it home, I knew within the first mile of riding it was the right bike having had the big BMW 1200GS and the smaller Honda XR400 previously, it ticked all of the boxes.

Over the next 5 months I travelled to Johns workshop in Biggleswade on numerous occasions to service, overhaul and modify the Dakar. Without johns expert knowledge, skill and enthusiasm I wouldn’t be as comfortable as I am about the bike I’m taking. John showed me how to replace, service and repair so much of the Dakar. I really appreciate John’s positive help. Thanks John.

Having said that if the engine seizes I will have to call for help, and that’s ok, I have done as much as I wanted in terms of preparation, I can repair a puncture or broken chain on the roadside and carry out all of the servicing myself but, situations will develop and circumstances will mean I will need help, I look forward to these occasions when I can hopefully meet the ‘Johns’ in other countries who will help me out.

I couldn’t make my mind up between soft or hard luggage, I liked the idea of bags but I was worried about security. It was also vital to me that I could ‘filter’ in traffic so I decided on aluminium panniers designed and built to my specification. After talking to many people I visited Ernie at ‘Overland Solutions’ he understood my needs and with his expert knowledge and fabrication skills we designed slim panniers that sit 1cm inside the extremities of the handle bar, as they are thin, about 150mm they are taller and longer so I estimate 46 litres each. We put power in one pannier which allows me to charge all of the electrical stuff. To the inside of the panniers under the exhaust and rack sit two aluminium tool boxes which hold all of my spares and tools. With the addition of a Rotapax Fuel Cell with rack on top for my roll bag I was more than happy.

During my research I couldn’t find any costing so I’ve put all of mine below.

Over the last few years I saved and planned in earnest but what I hadn’t anticipated was the manic month before I left when all of the major decisions had been taken and acted upon, my house was rented, I had finished my job, my kids were working and doing well in life and my dog, Jess was at my brothers. It was the hundreds of small decisions regarding what tent to buy, what clothes, how many SD cards, which cash card… that consumed so many of my thoughts. It was so demanding and consuming all I wanted was to go and sort the detail out en route.

So the bike was prepared with luggage system, now for the many other consideration… See below; 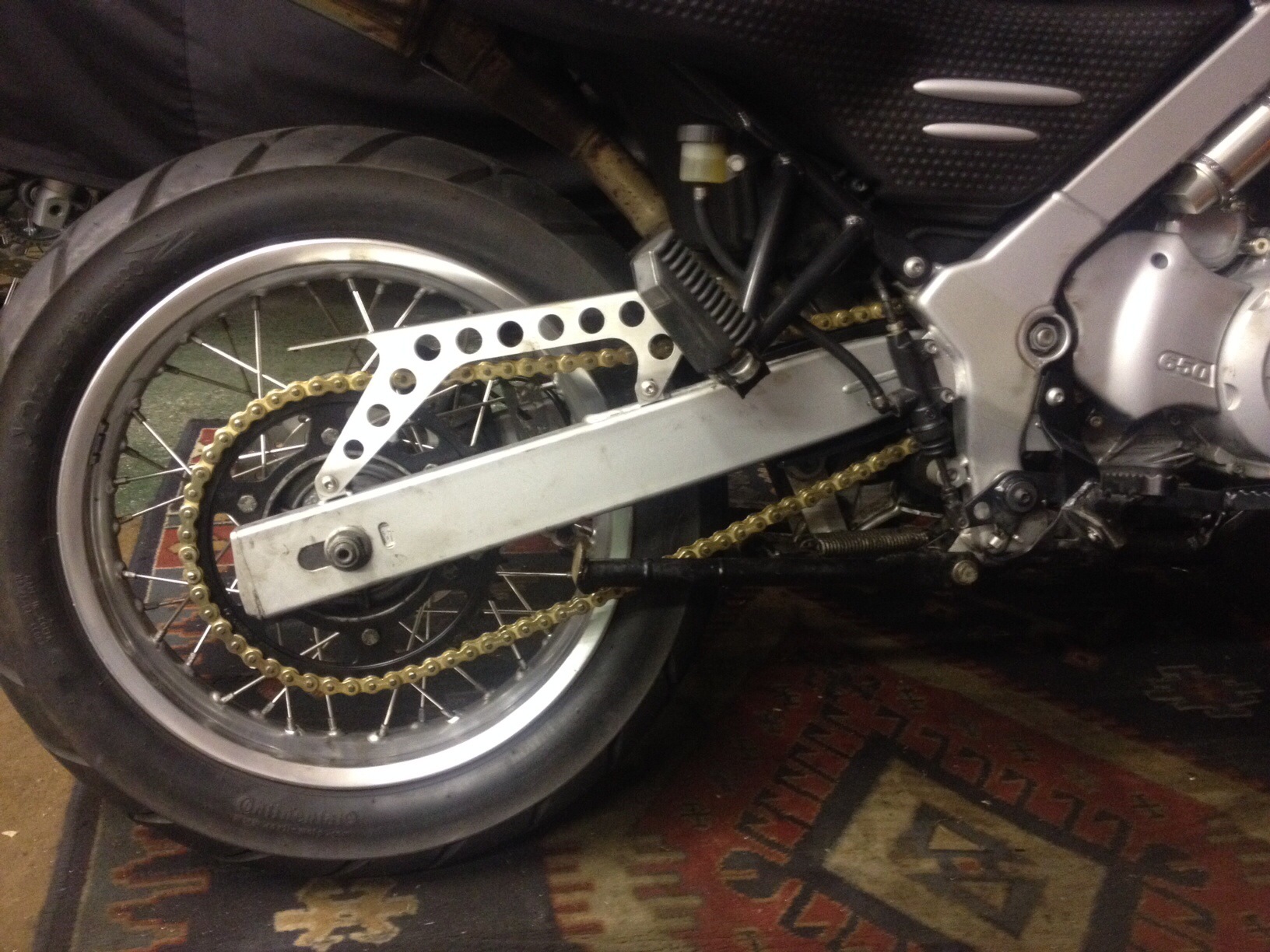 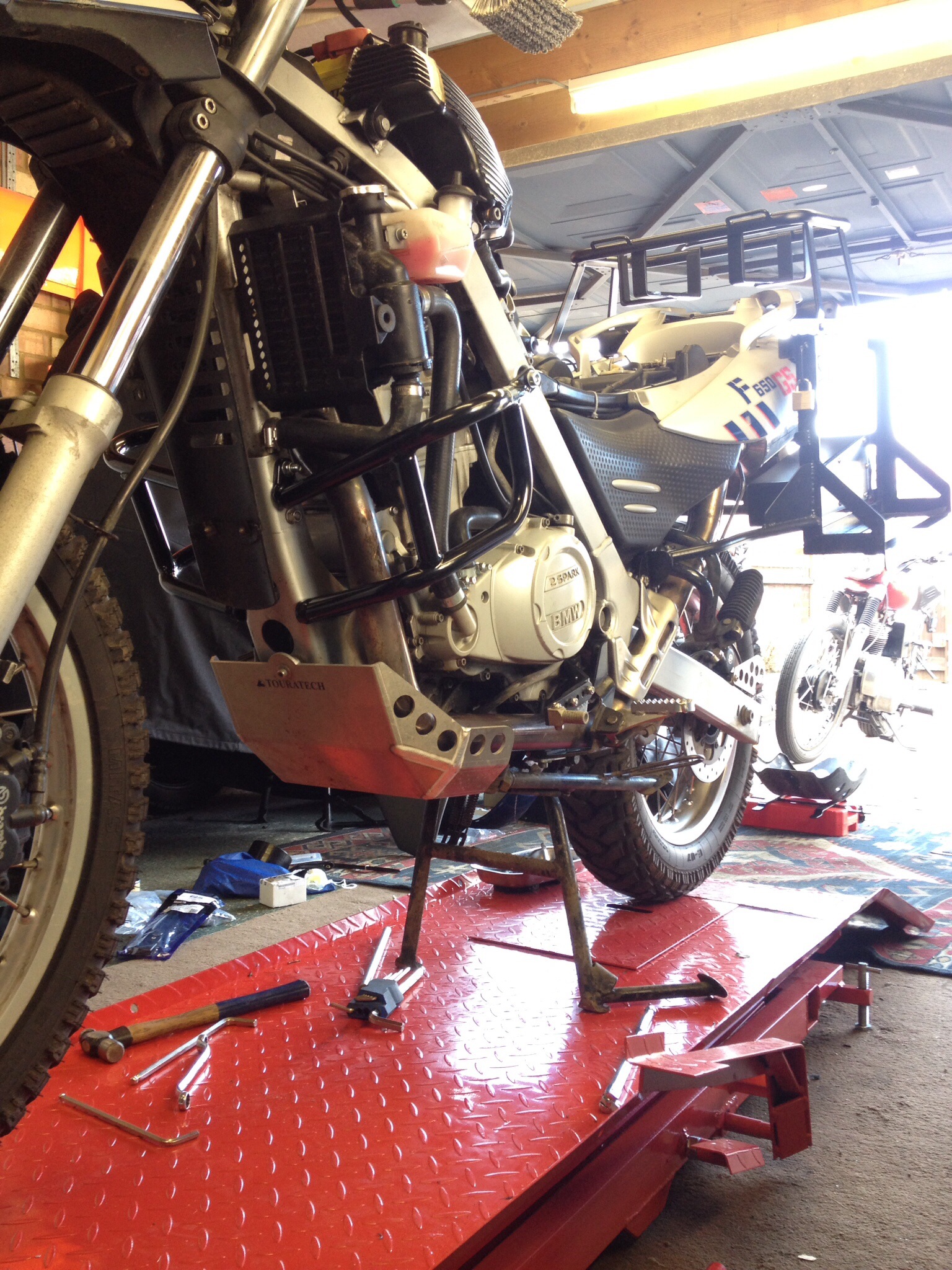 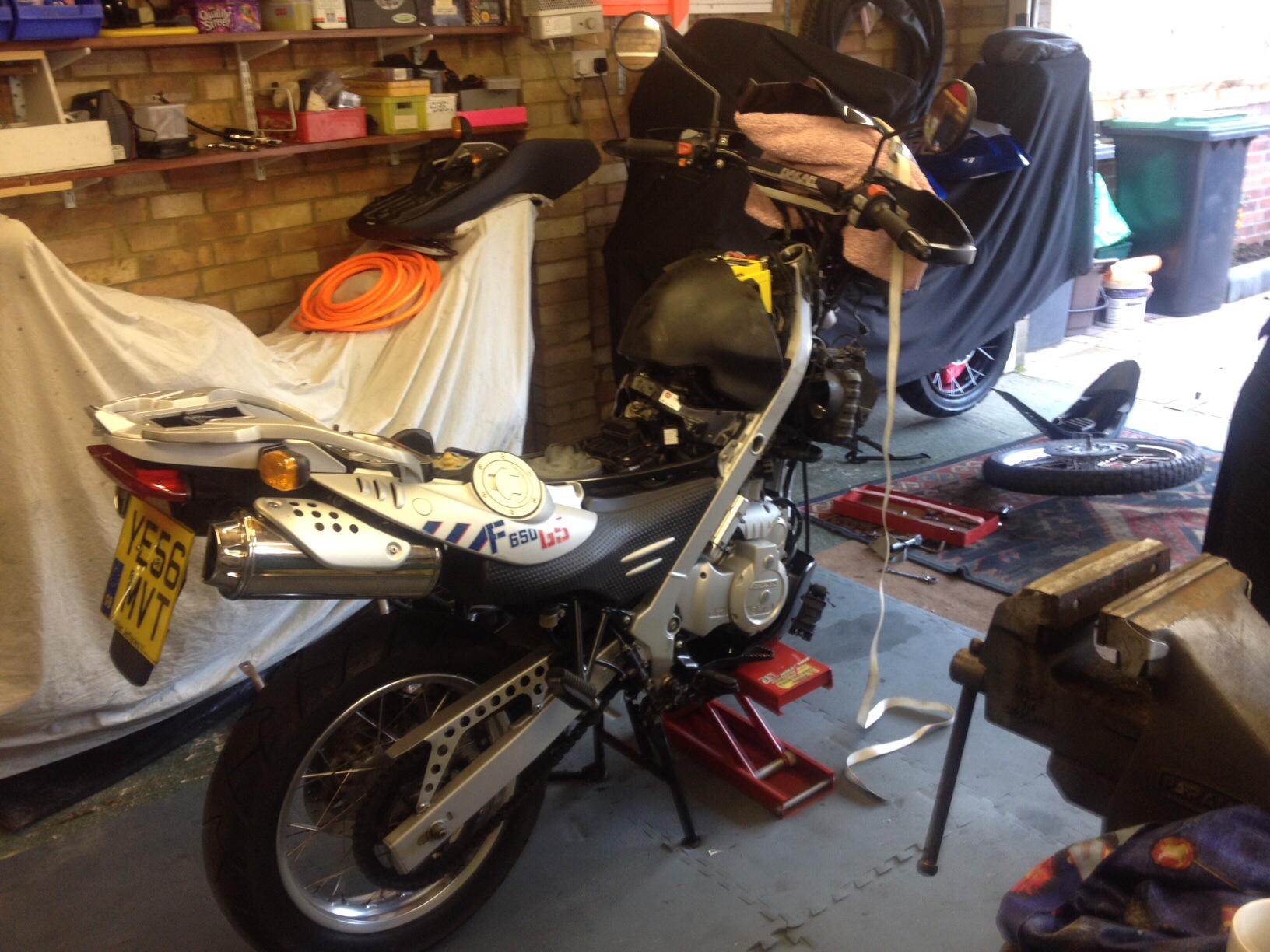 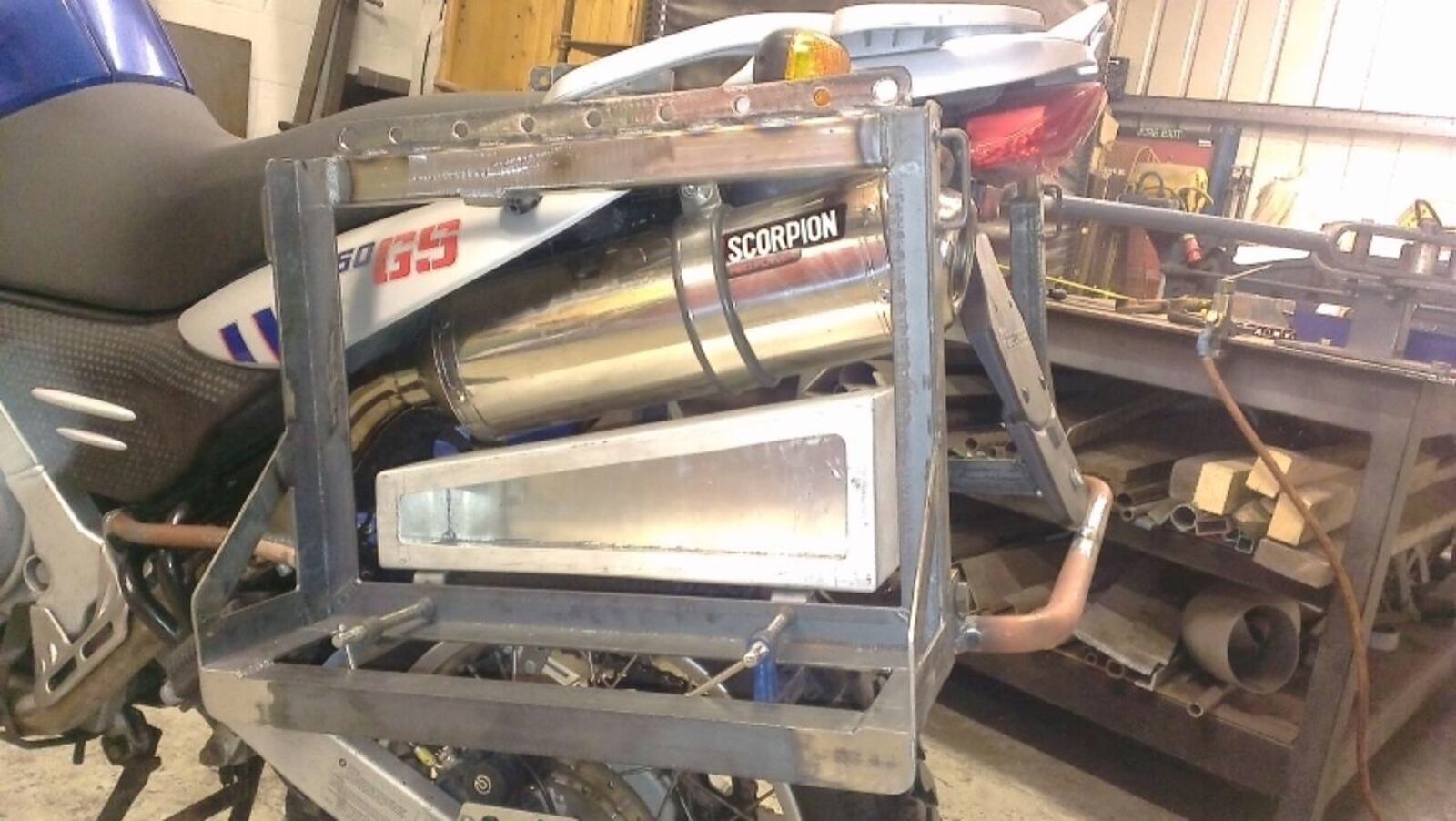 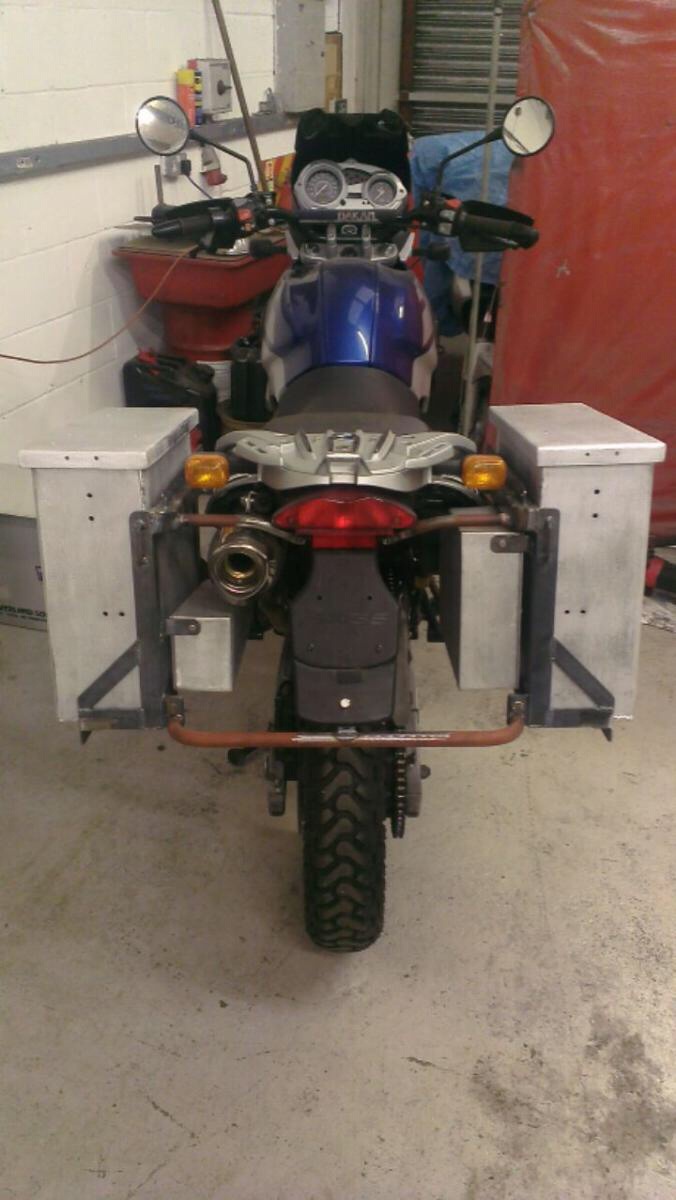 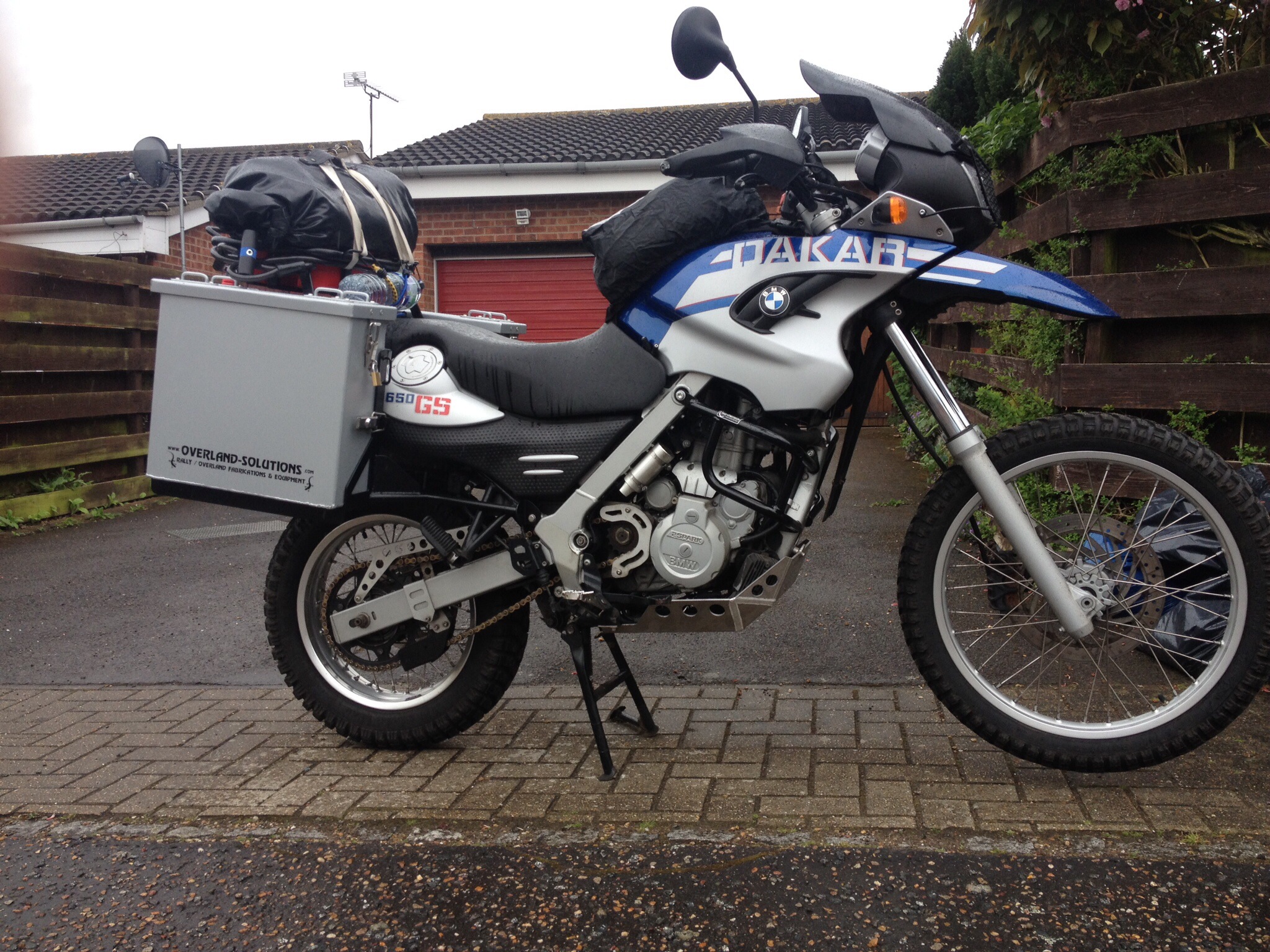 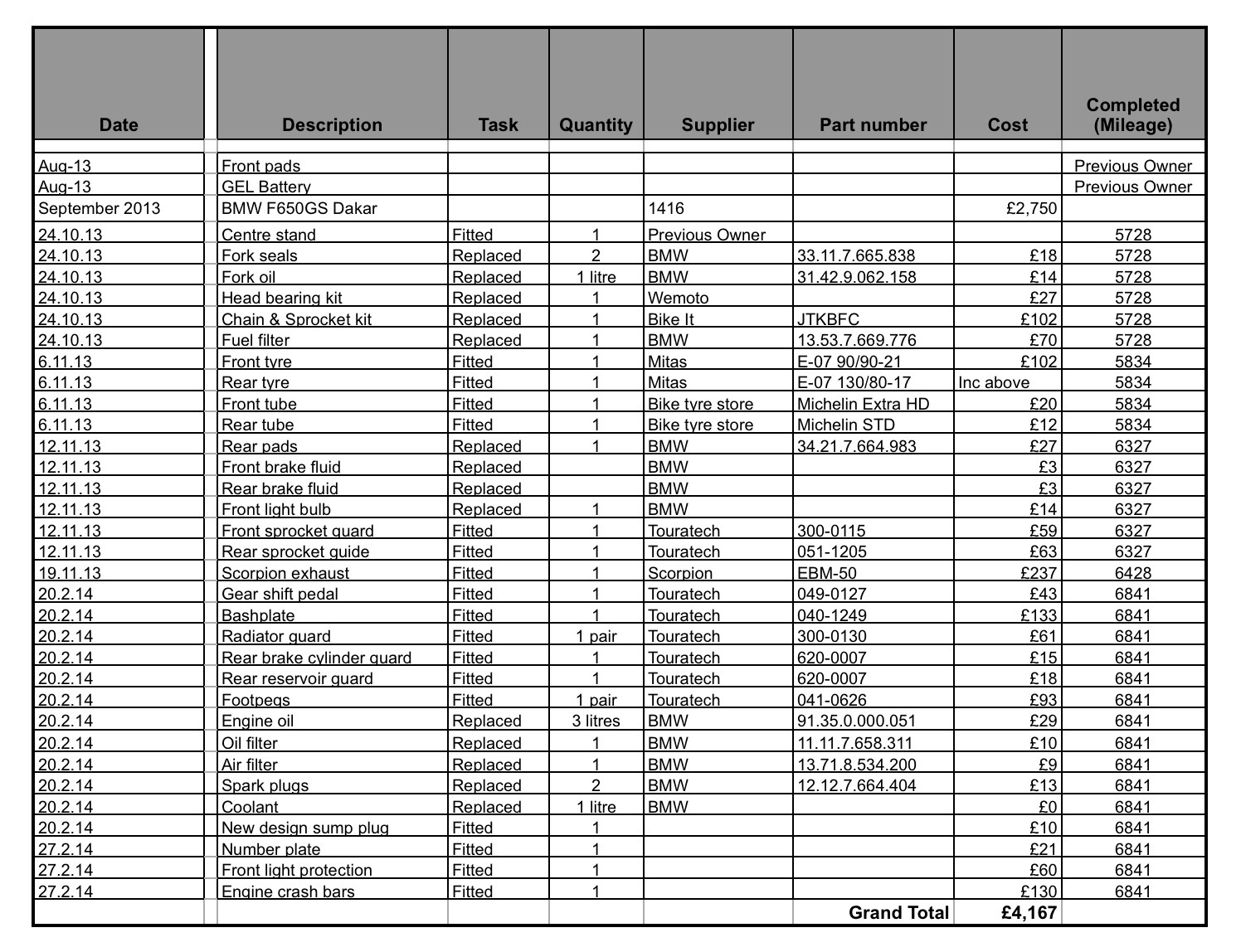 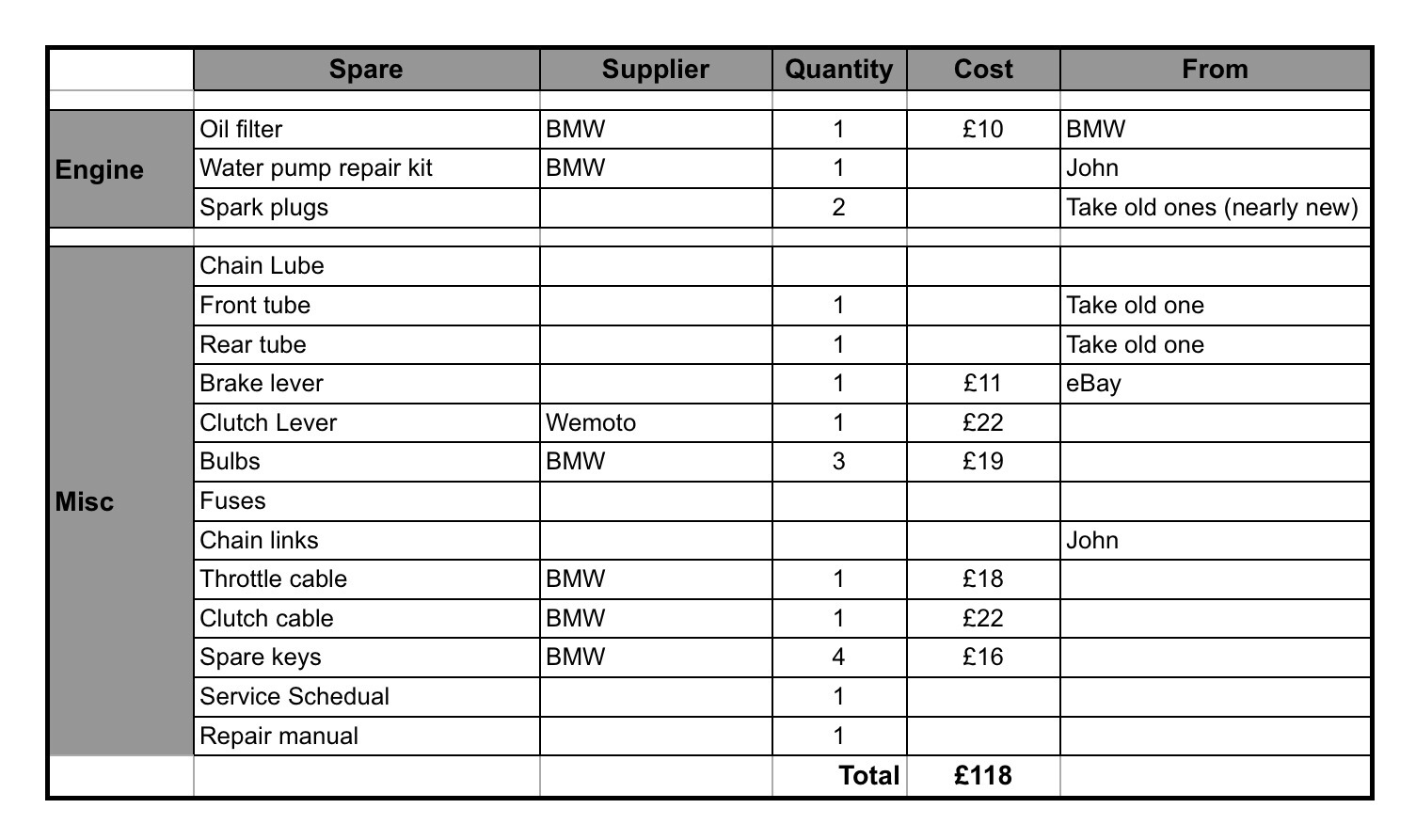 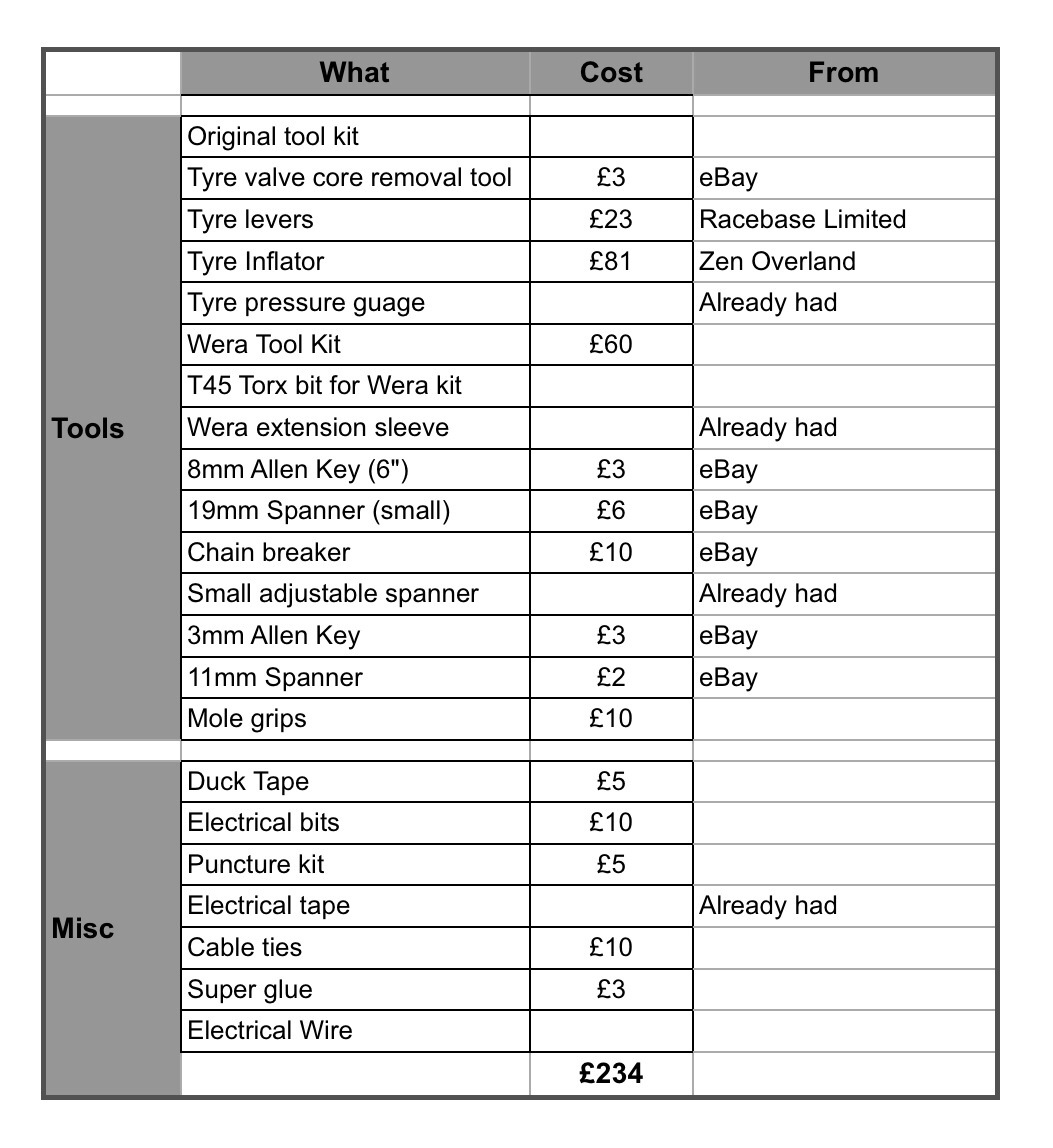 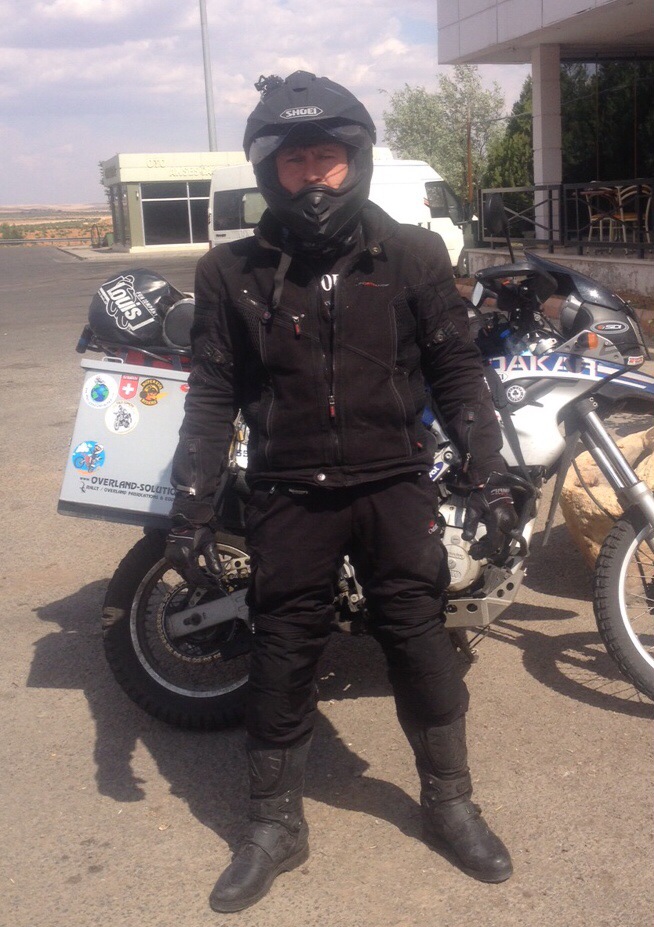 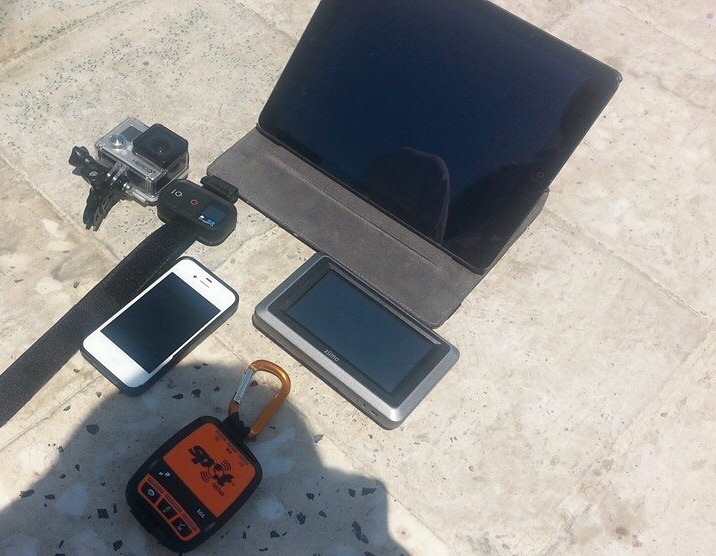 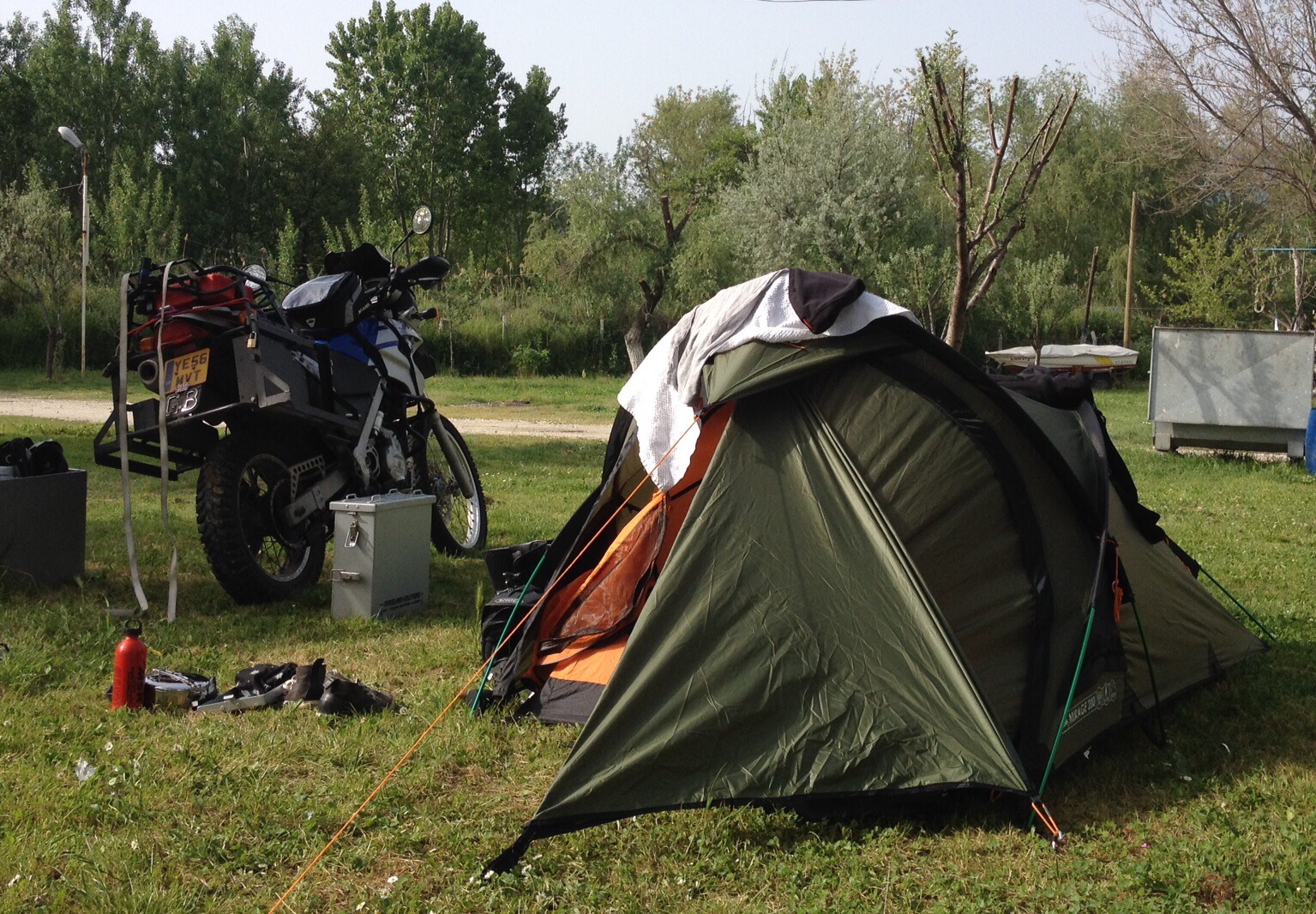 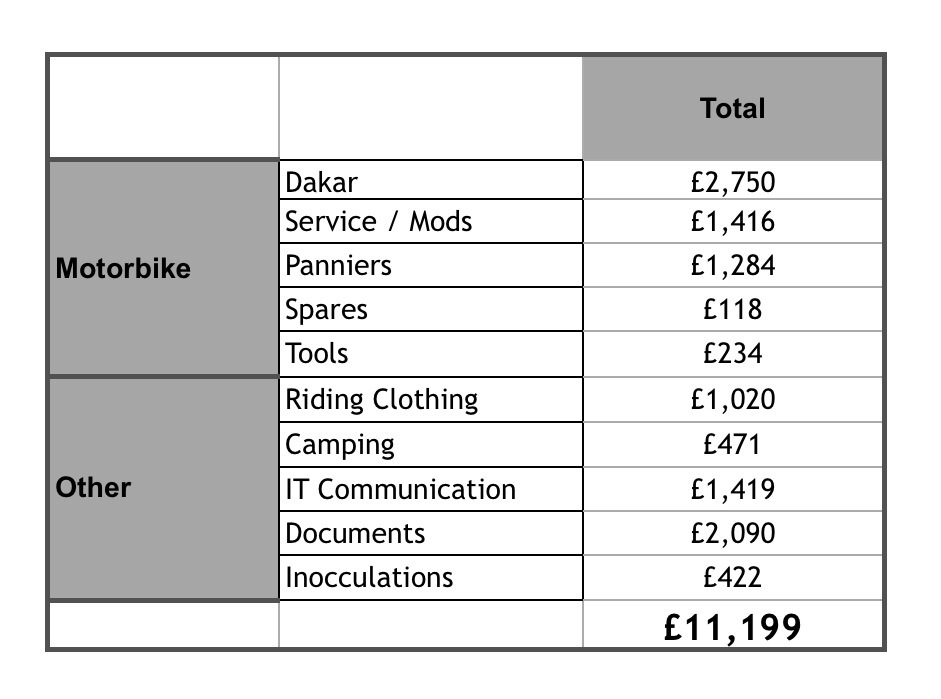