I only bloody made it to Sydney! London to Sydney overland, I didn’t put my motorbike on a plane and only used boats for the shortest essential sea crossings. When I left England it was unimaginable that I would be able to achieve this with serious conflicts in Pakistan, Myanmar (Burma) not allowing overland passage from India to Thailand and the many hundreds of obstacles along the way. Well bloody great, amazing, I can’t quite believe it. I feel so great having accomplished something I had fantasised about for so long.

More great Aussie hospitality, I stayed with Dave Ross in Paramatta who raced superbikes in the 1980’s, Dave is one of life’s ‘can do’ people and inspired me to get my motorbike shipping sorted out as soon as I arrived with him. Dave took me to meet Ray who owns ‘Western Motorcycles’ in Penrith who said he would help with both my bike repairs and crating of the bike ready for airfreight.

With everything arranged for next week I headed into central Sydney to stay with Leo for the weekend, I met Leo in Cambodia earlier in the year. He lives in Surry Hills, right on the periphery of the city centre, this location has to be my favourite part of any city in terms of a place where I could live. I’ve visited many places more spectacular, interesting with amazing sights but Surry Hills is my sort of place, it reminds me of cool places in London. I cannot live in the suburbs of any city, I have to be right in the middle of a town / city where there is constant activity and like minded people or the countryside. 99% of people live in the suburbs, I’m obviously in the 1%. Leo took me to a party on saturday night and on Sunday it was his birthday so we went to ‘The Old Fitzroy’ a pub that reminded me of London pubs, it had a small intimate theatre downstairs and was similar to the Kings Head in Islington.

Throughout my time in Sydney (actually the whole of Australia) people would confirm my feeling that Australia is one of the most controlled countries in the western world. Sitting outside a pub drinking a beer in the sun the barman came out and said that there were too many chairs outside, the council only allow 9 chairs outside. How crazy. Another time whilst walking around I saw a policeman hiding behind a tree and when a motorbike doing no more than 10 km/hr came passed filtering in traffic he jumped out and pulled him over, come on Australia, your control is way over the top.

Having partied all weekend Monday arrived and it was back to the world of motorbike mechanic, my clutch was slipping so Dave & I sorted it out, but what hassle it is getting the clutch cover off! Anyway all repaired.

Tuesday was to be my last day with my bike so I was up early and off to explore. I spent the day riding everywhere in the city. I lived in Sydney 25 years ago so I went to all the places I used to, I must have rode over the Sydney harbour bridge 6 times, stopped outside the opera house for the photo shoot and I found the hotel I lived in all those years ago, it hadn’t changed at all. I had a great day.

On Wednesday Dave took me to Western Motorcycles where we did an oil change, put a new chain on, emptied the fuel tank and purged the stystem before we created the bike ready to take it to the airfreight warehouse tomorrow. A reporter and photographer from the press turned up so let’s see if it gets to print? Ray, thanks for all of your help and support.

Anything is possible, anything can be achieved, nothing can get in the way of determination, planning and desire. Hold the front page, I’m coming home.

Well, that was the plan…

I met Maria from Russia 8 months ago in Thailand and we’ve been meeting up at various places en route to Australia, anyway Maria is back home in Moscow and why ship my Dakar to England when I can ship it to Moscow? So, with determination, planning and desire I applied for my visa for Russia on Monday and arranged for my bike to be air freighted to Moscow.

Thursday arrived and I had a few things to do today, the culmination of the last few days work. I had to go to the Russian consulate and collect my passport, hopefully with a Russian visa inside, take the Dakar which is now all crated up to the airfreight warehouse, visit the Australian Customs and get my carnet stamped out of Australia, find a hotel and book a flight to Moscow for a few days time. The day started well, I got my visa, took the Dakar to ‘Matzen Cargo’, sorted all of the paperwork out and then went and had my carnet stamped. It was too easy, well let’s say that the preparation was spot on! It was only 12.30 and I felt good.

The Australian Customs offices were near the airport and I thought ‘what the hell let’s see how easy it is to get a plane to Moscow at the last minute’. I walked over to the airport and found out there was a flight leaving in 1 1/2 hours. I had to make a quick decision as they would start boarding the plane soon. So, I paid for the flight, checked in, passed through passport control, security and had just enough time left to be one of the last to board the plane. Wow, that was quick and easy. At 3.30pm I was at 35,000 ft and heading west for the first time in 16 months!

25 years ago I loved living in Sydney, I still love it today. 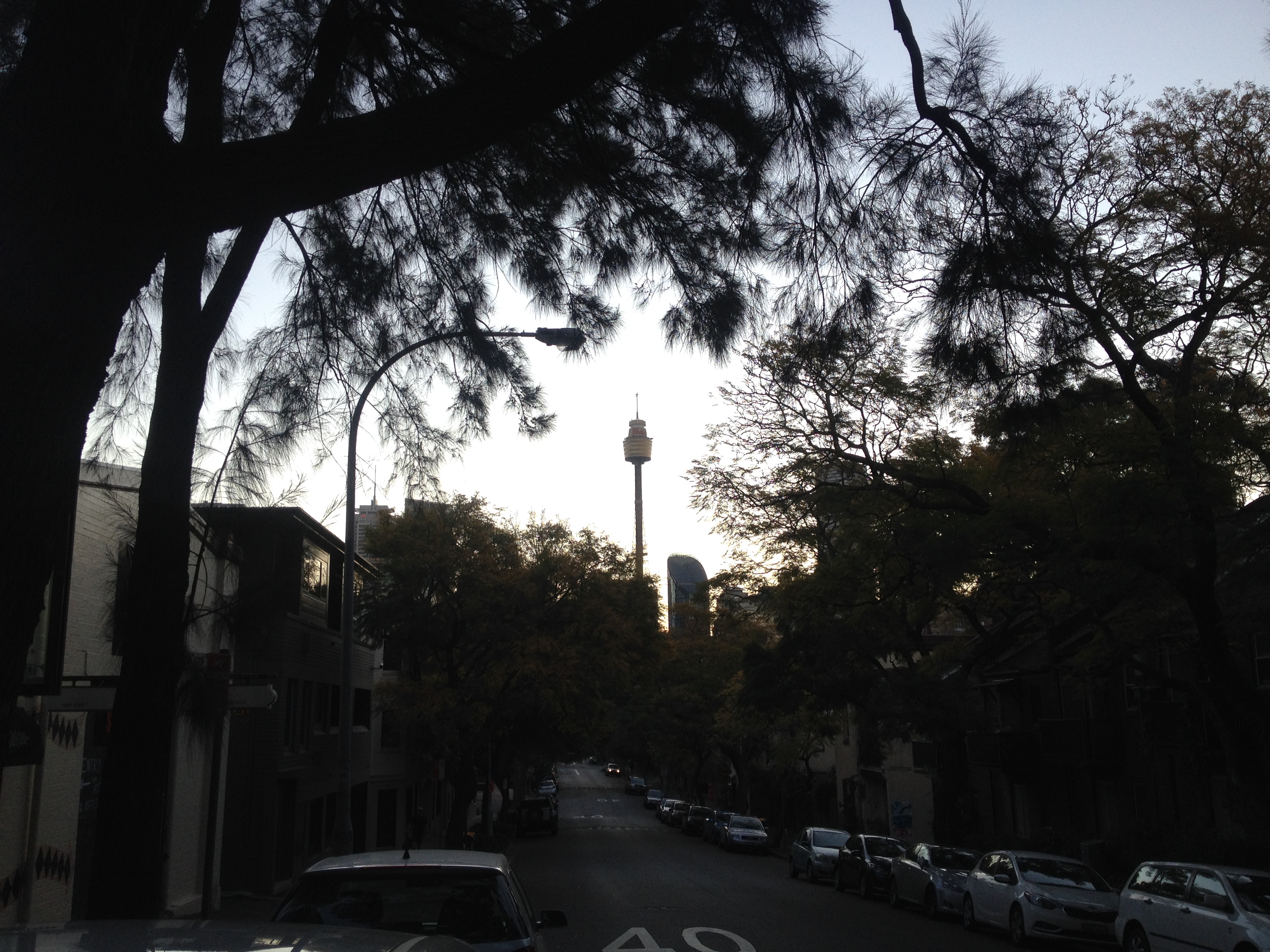 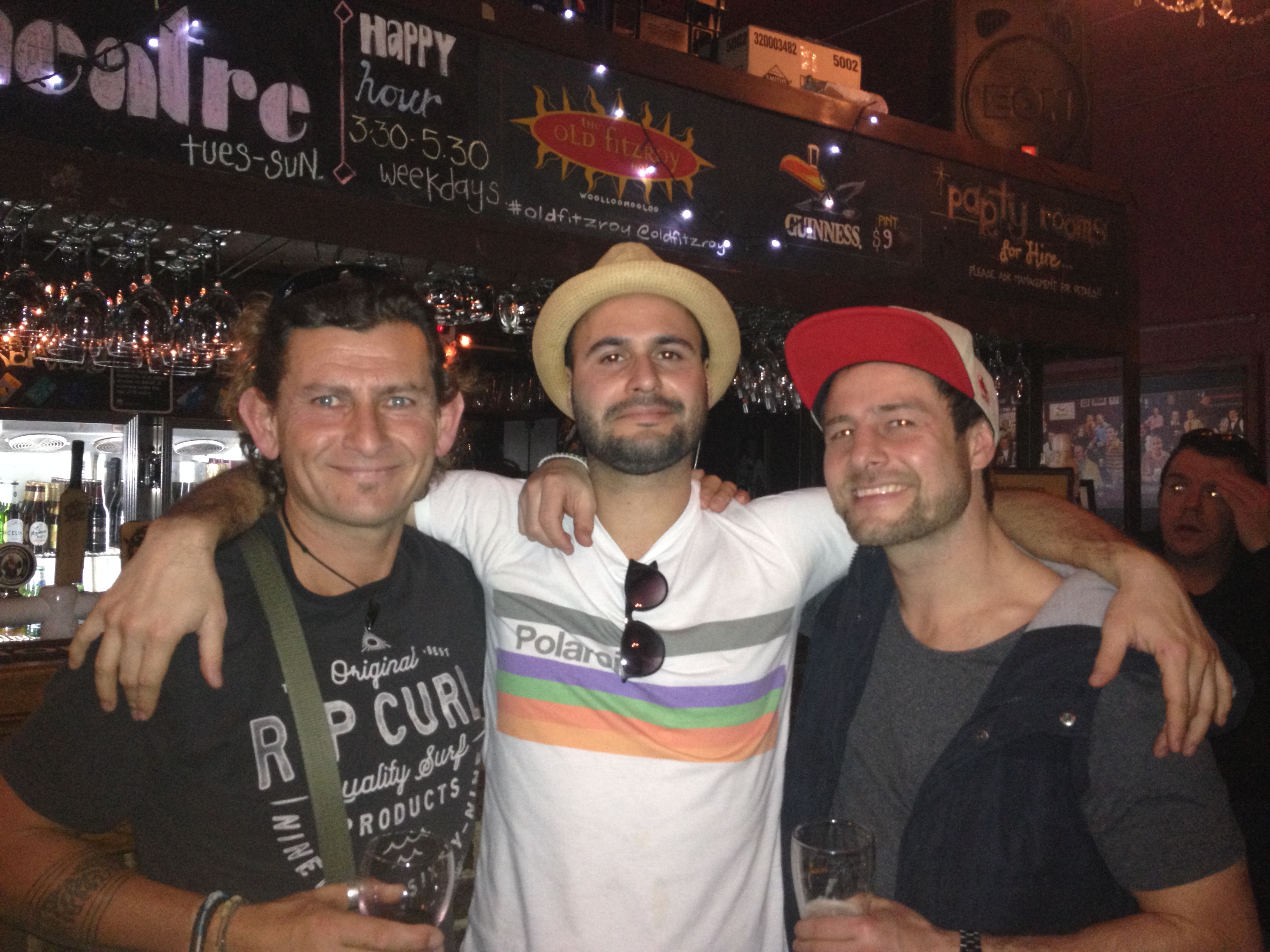 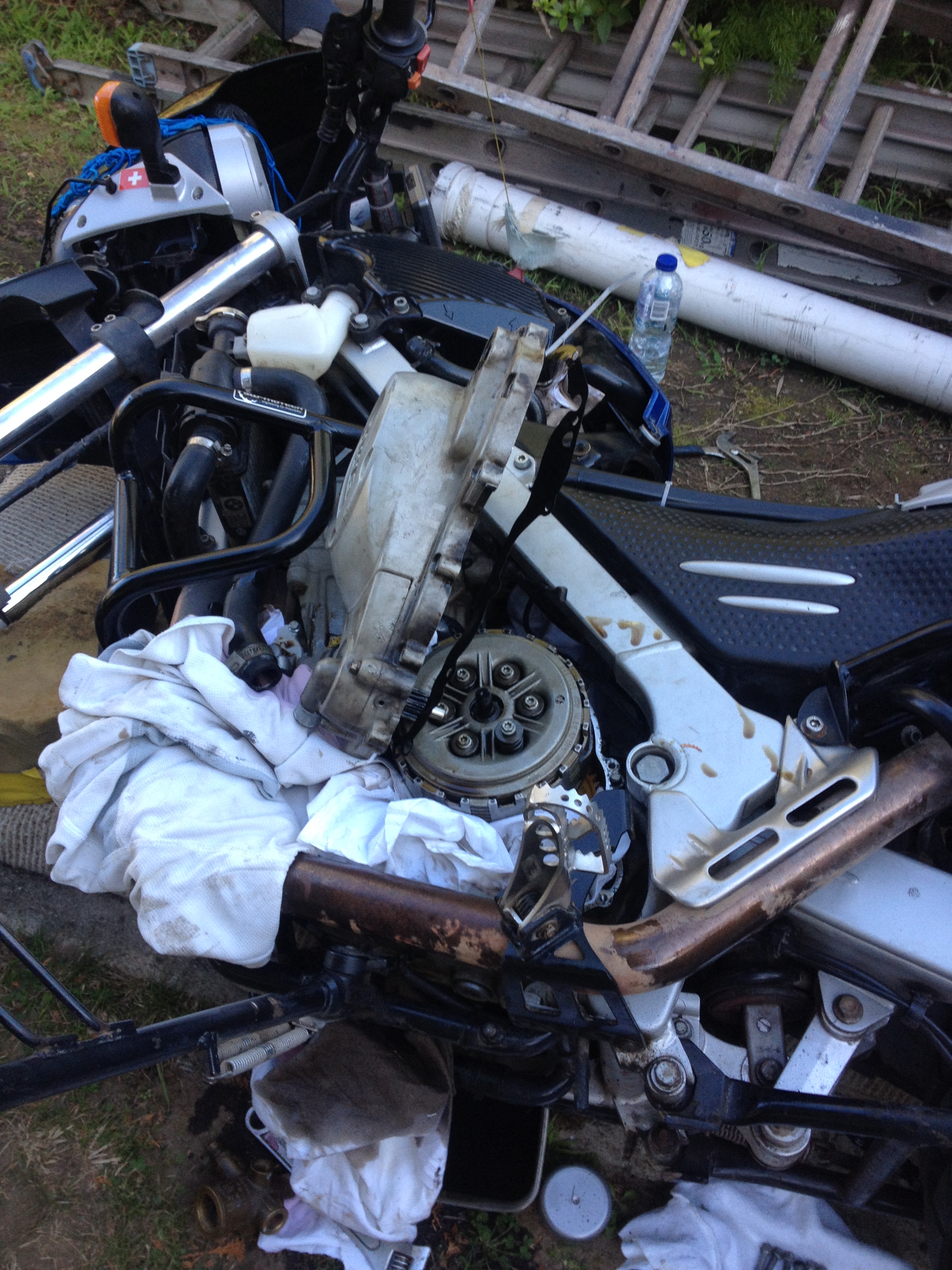 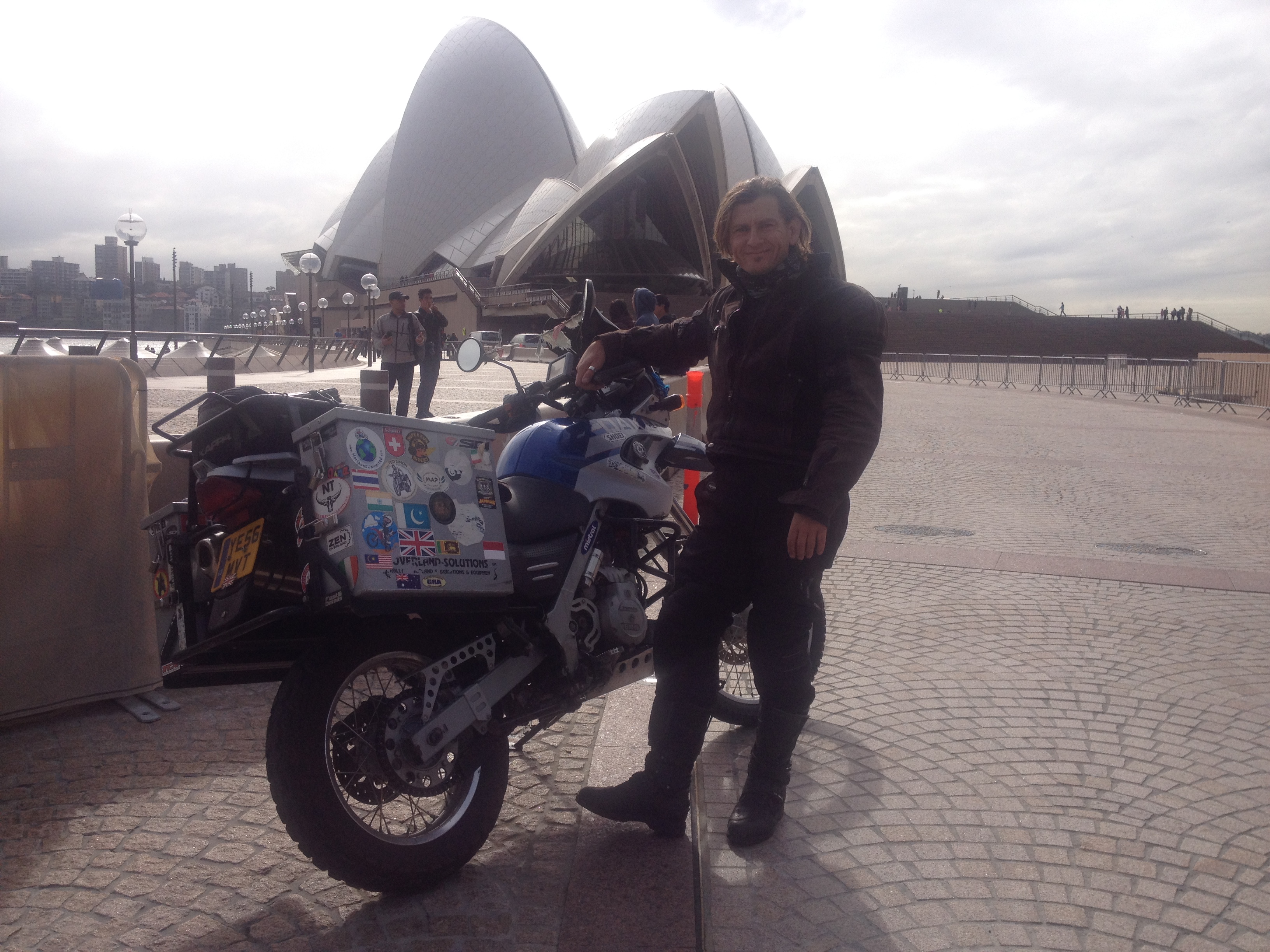 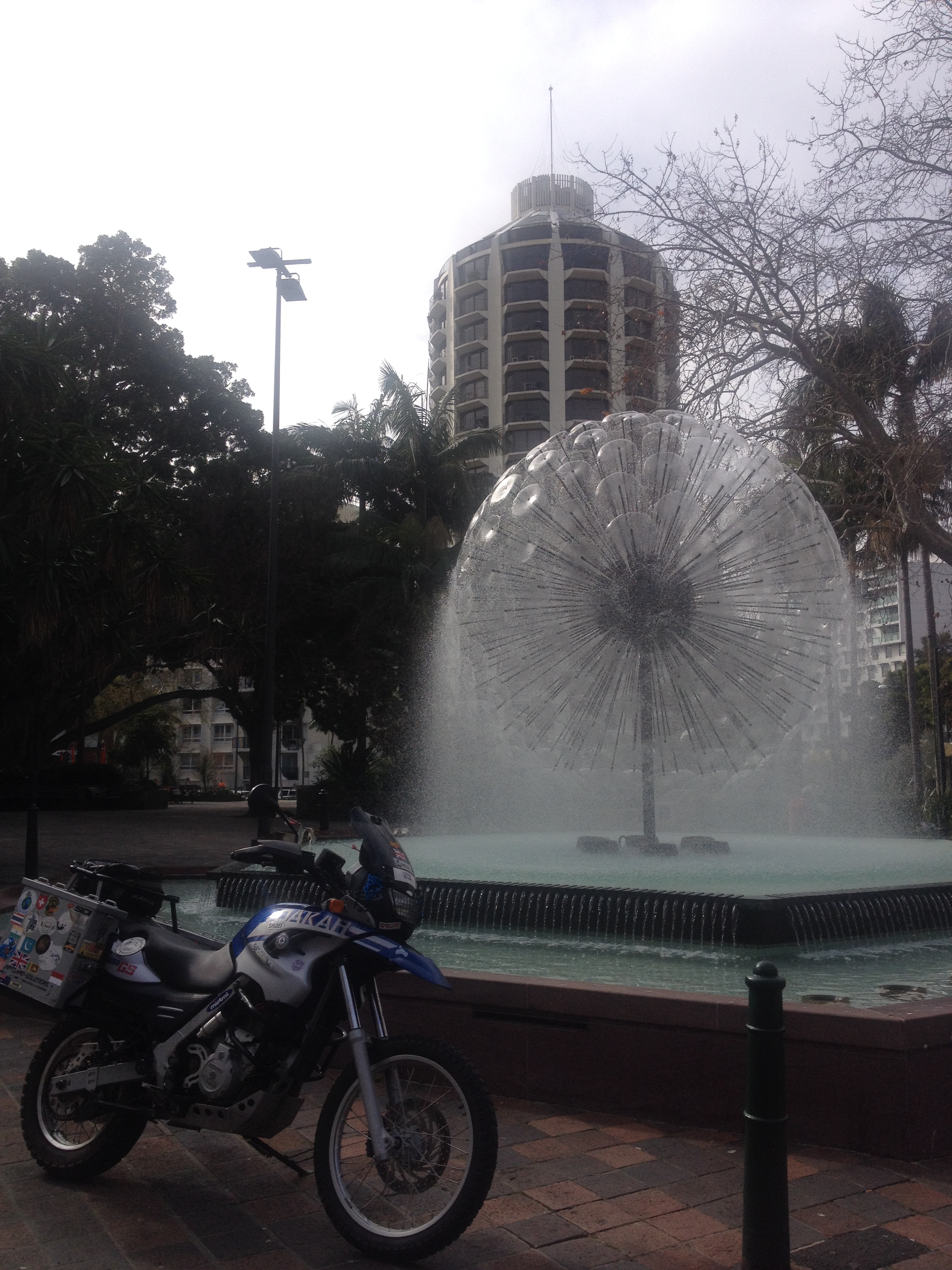 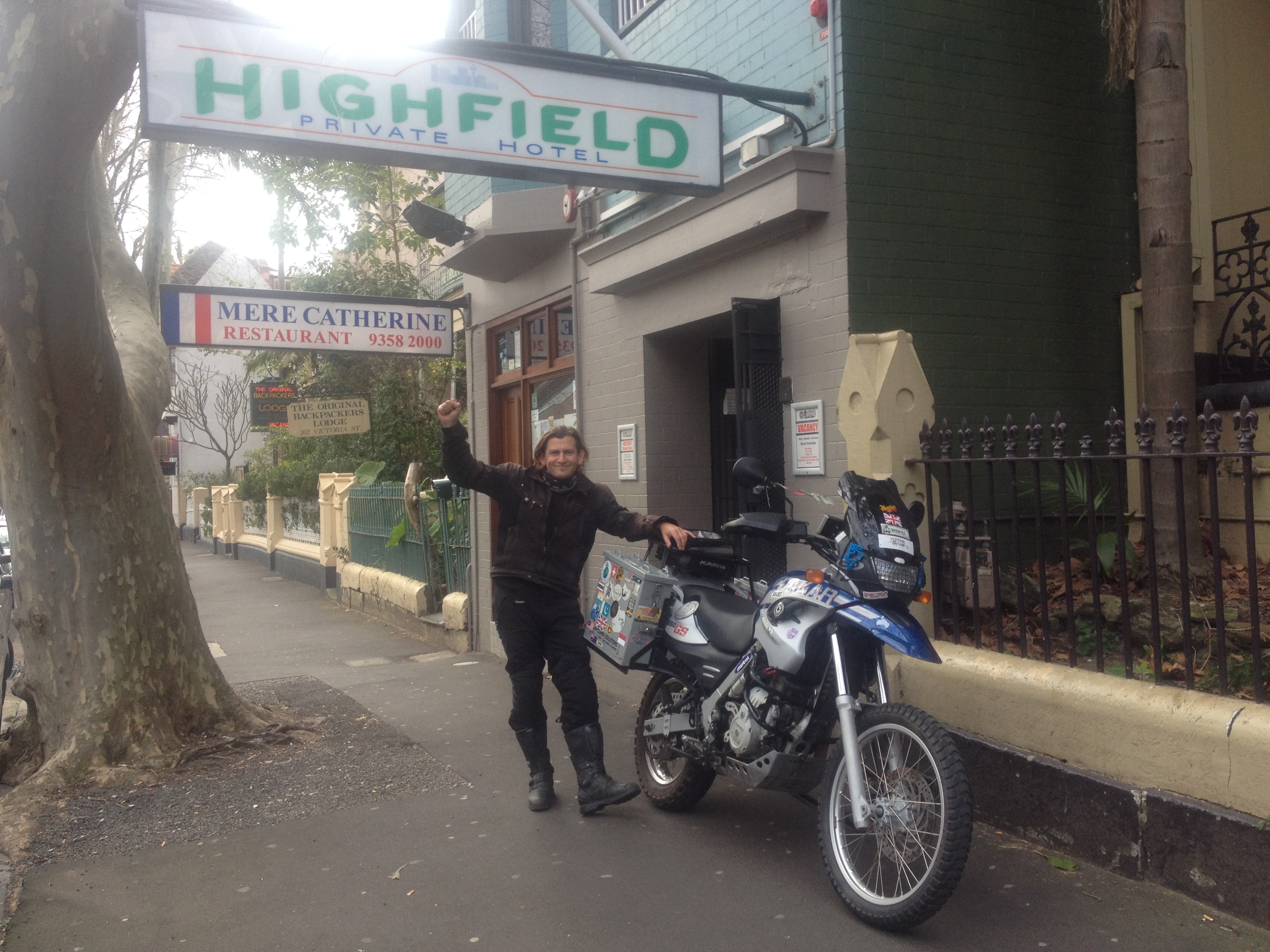 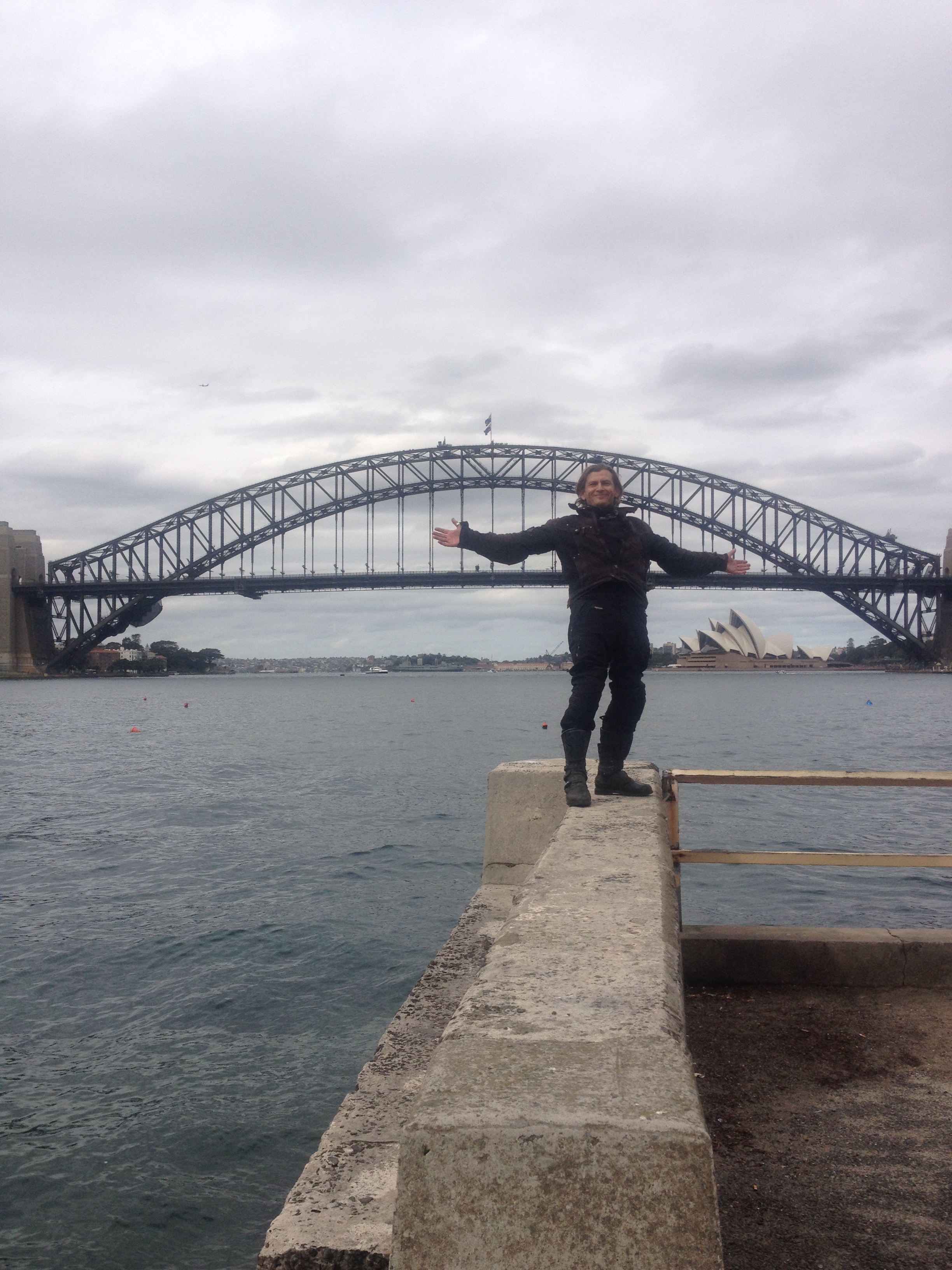 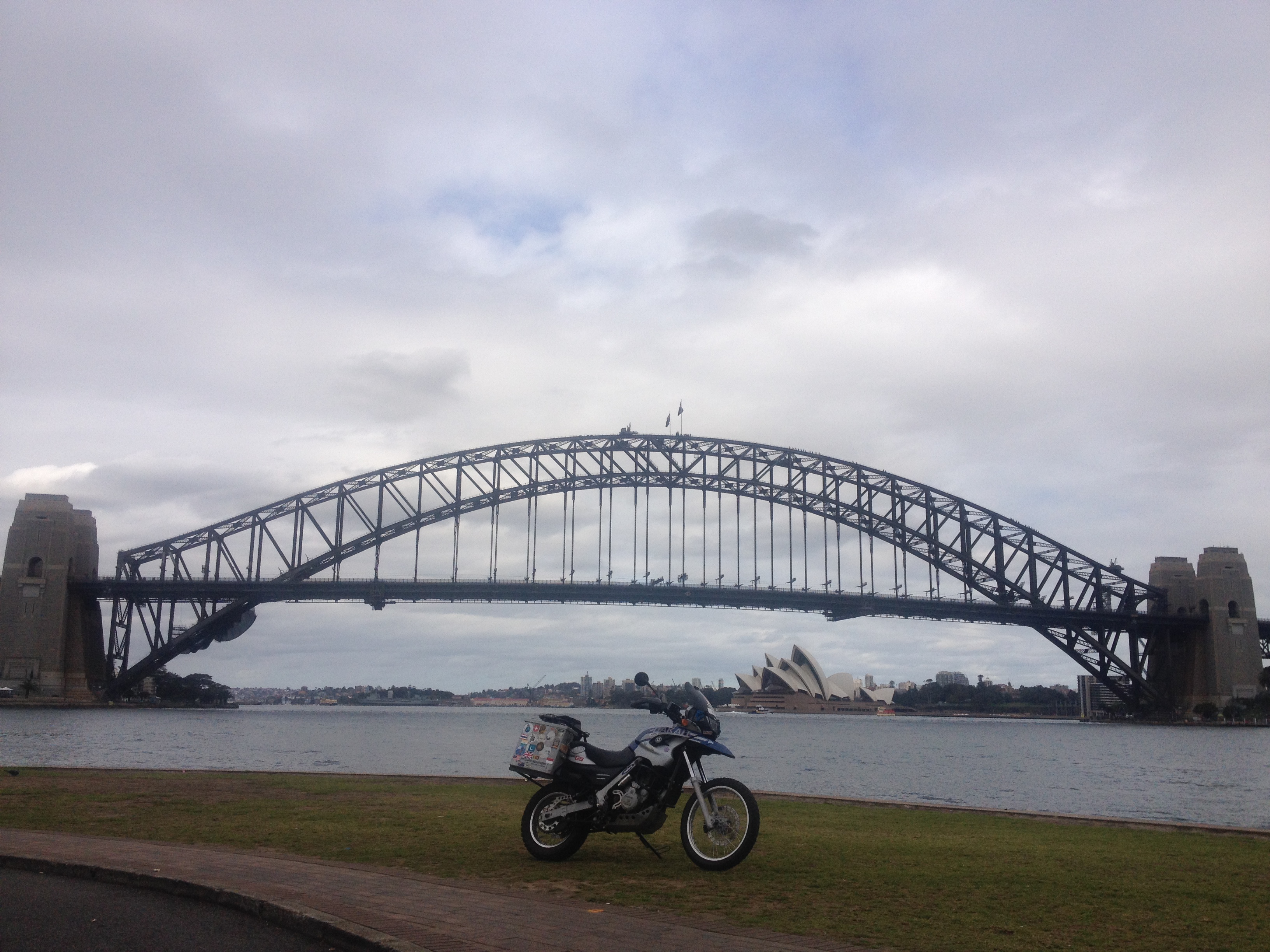 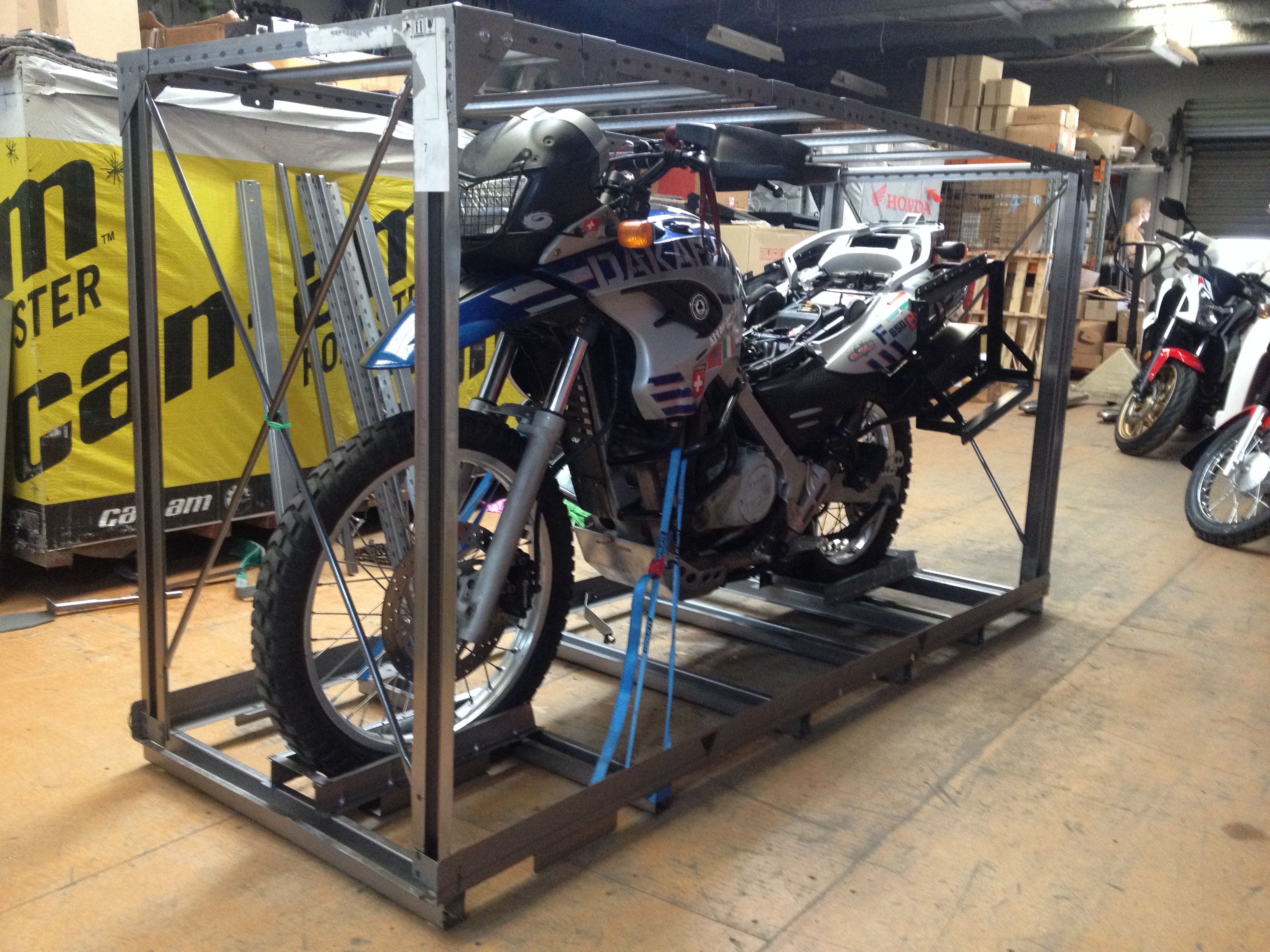 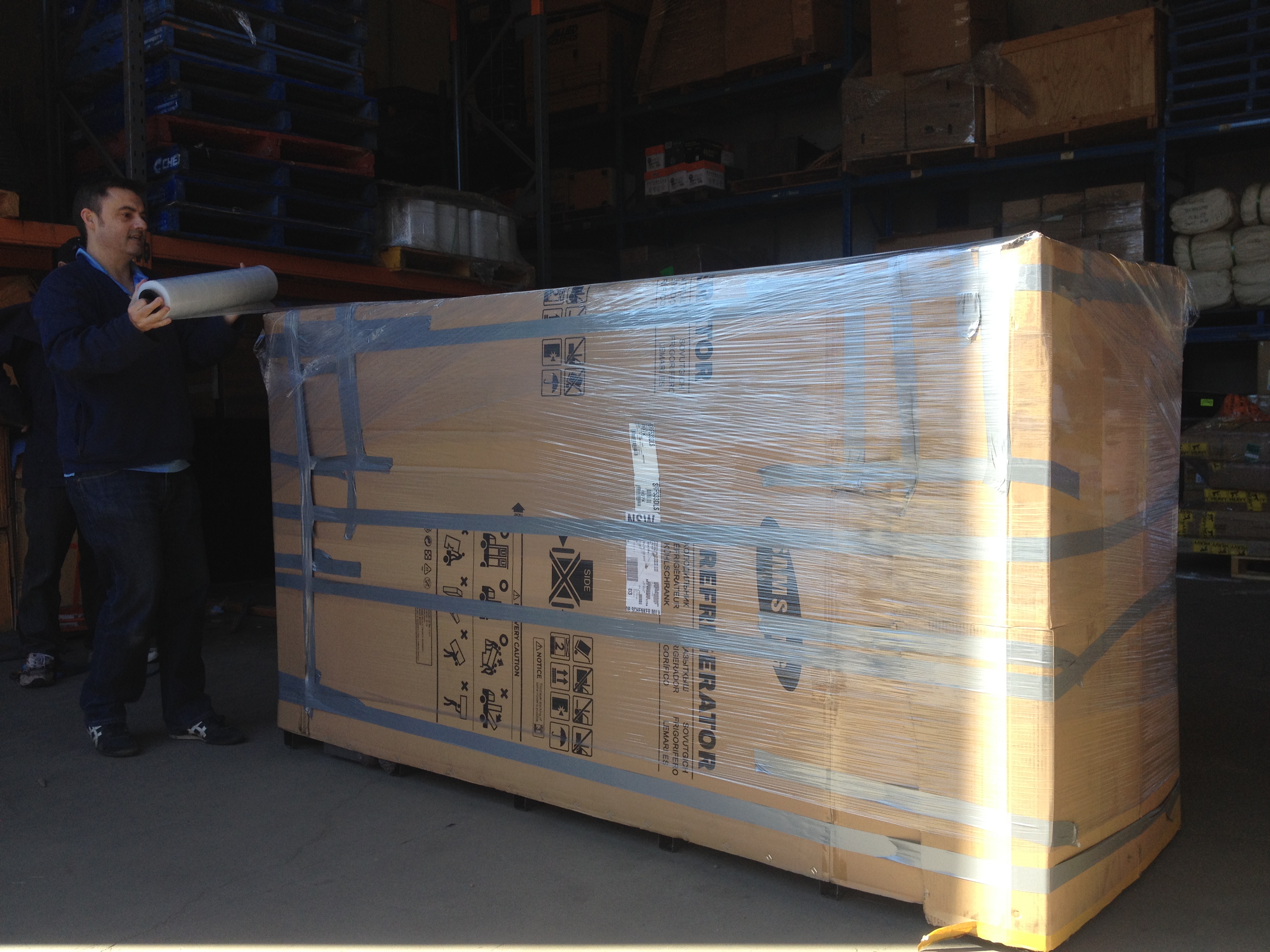 I have lived in Chelmsford, England since I was 14, prior this this I was a country boy having been brought up in a small hamlet in rural Essex. I have two wonderful kids, Beth & Olly and have given my job up and rented my house out to travel the world.
» Blog » Days 484 – 489 Sydney (Australia)... Previous post:
Day 483 Walcha – Sydney (Australia) / motorbike GS Dakar RTW overland adventure traveller Next Post:
Day 490 Sydney – Moscow (Russia) / motorbike GS Dakar RTW overland adventure traveller