The alarm was set for 6am but the mosque over the road started the ‘call to prayer’ at about 5am so the alarm wasn’t really necessary. I hadn’t been on the road this early for a long time and was really looking forward to riding in Indonesia and seeing if I would survive a day riding with Lyndon?

We were told that you only need to stop at a red traffic light if there is a policemen there, having not seen many policemen the previous day it was surprising to see loads of them at most junction this morning. By about 7.30am we were out of Medan and heading south to Lake Toba, the traffic outside of the Medan wasn’t too heavy, I had heard many stories of how slow riding in Indonesia can be. We started to climb and took a more local road which had so many pot holes, the whole road had broken up in many places, I watched Lyndon ride across with ease and did my best to keep up. The rode peaked at 1,800 metres and the view of Lake Toba was magnificent, it’s 100km long and the largest lake in Indonesia.

We dropped down to 900 metres to the western side of the lake where we crossed onto Samosir Island. Time for lunch at a very local place on the shore where the food was lovely.

We borded a ferry to cross to the Eastern mainland and Lyndon said my panniers seemed loose, upon inspection one of the main bolts holding the pannier frame to the bike frame was missing, no doubt shaken out after the assault course it had just endured. I would have had to cable tie it as a temporary measure but as Lyndon had both the expertise and spare bolts he sorted the problem out in a few minutes. We stopped at 4pm and bearing in mind we were on the road for nearly 9 hours (maybe 2 hours of stops) we only achieved 200 miles. I was amazed I didn’t feel tired as I havent been in the seat this long for months. 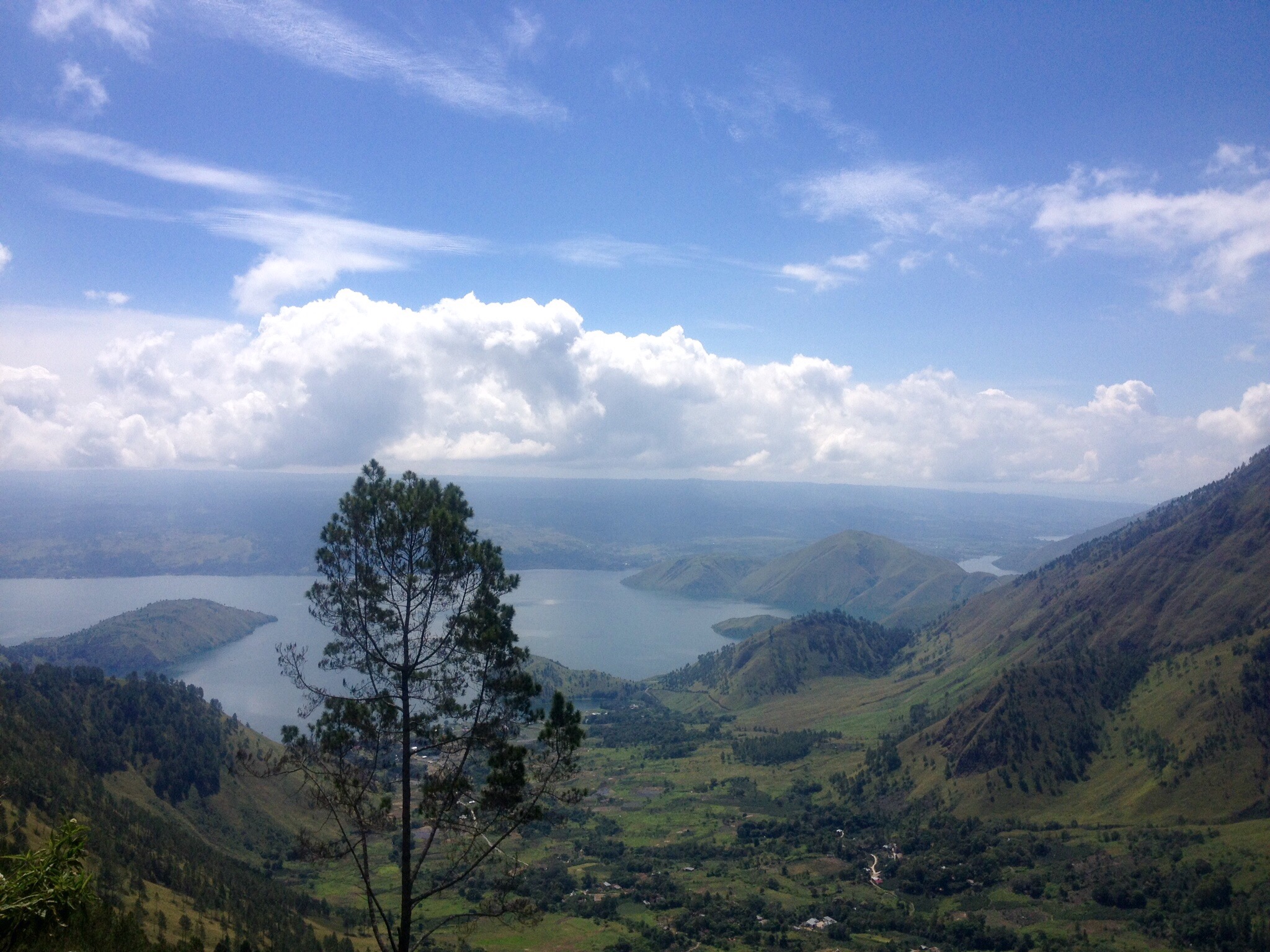 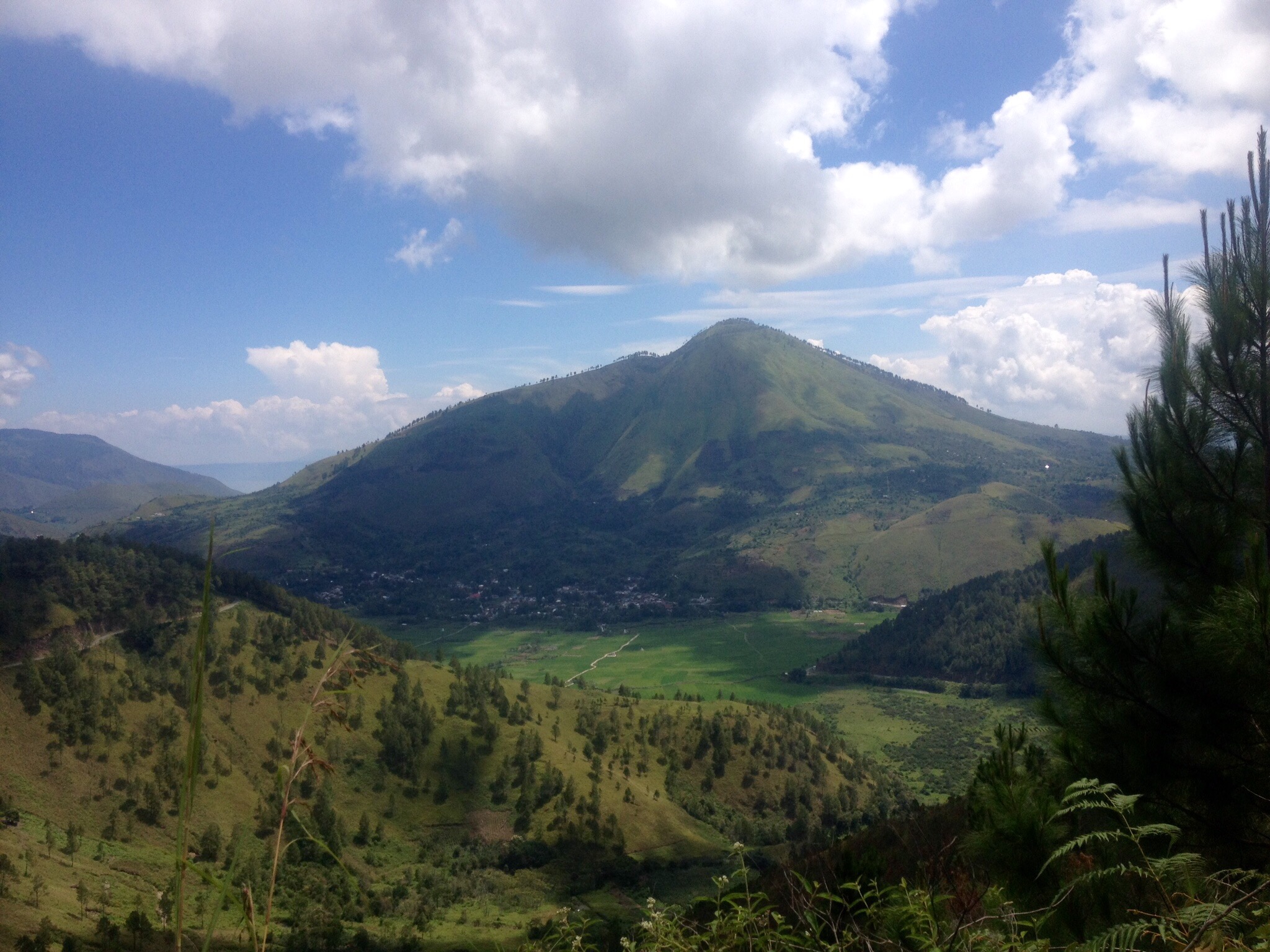 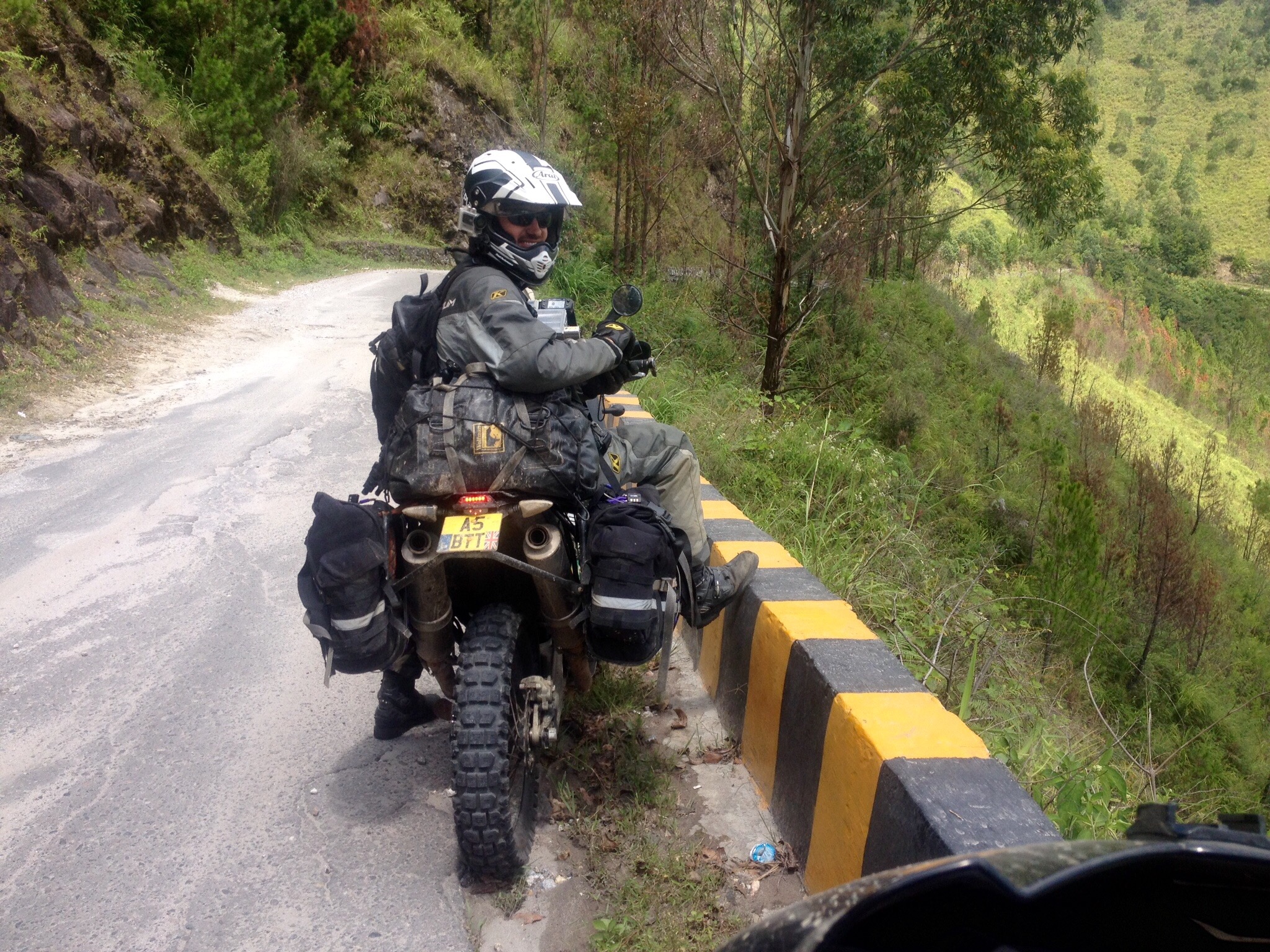 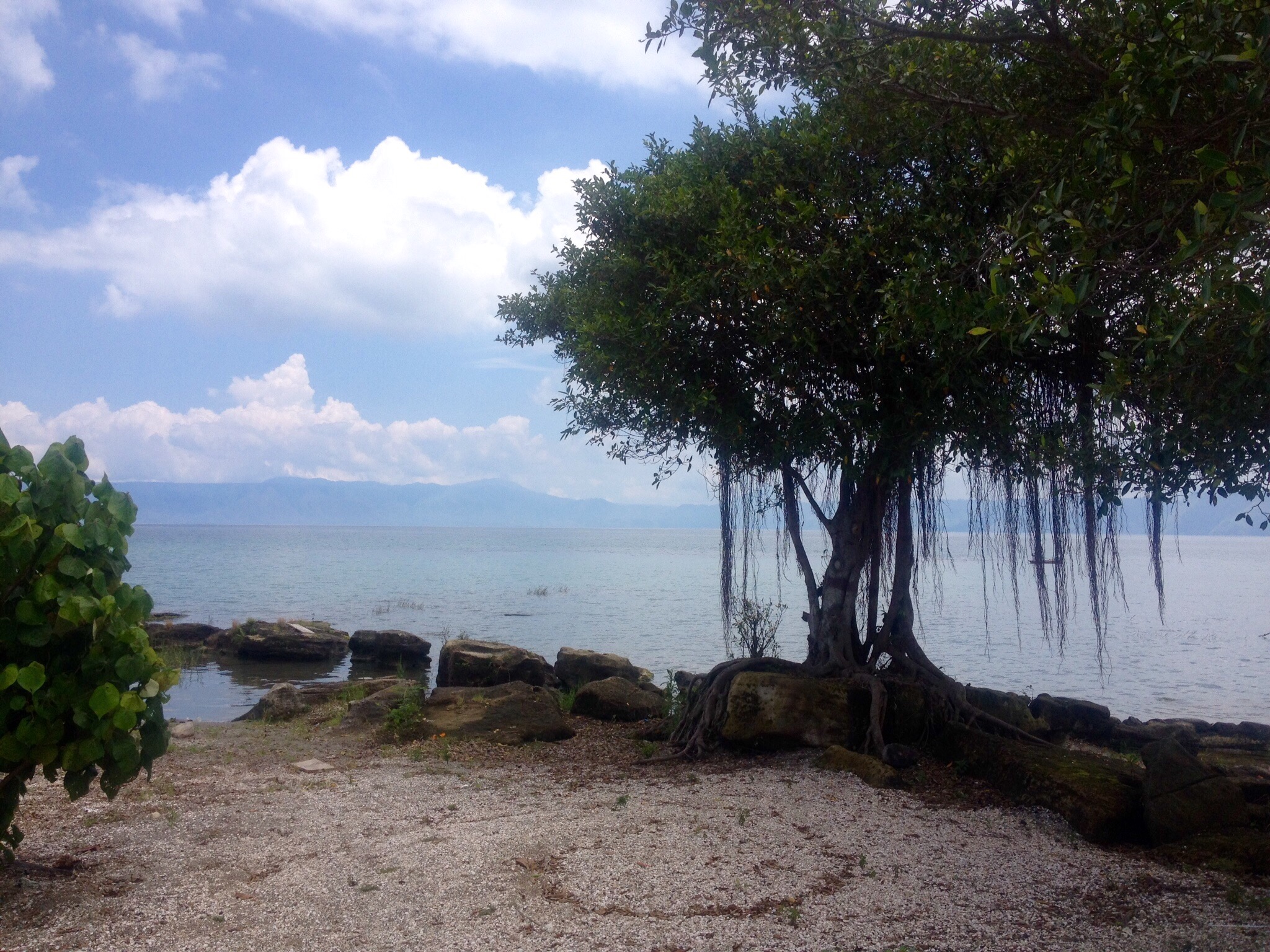 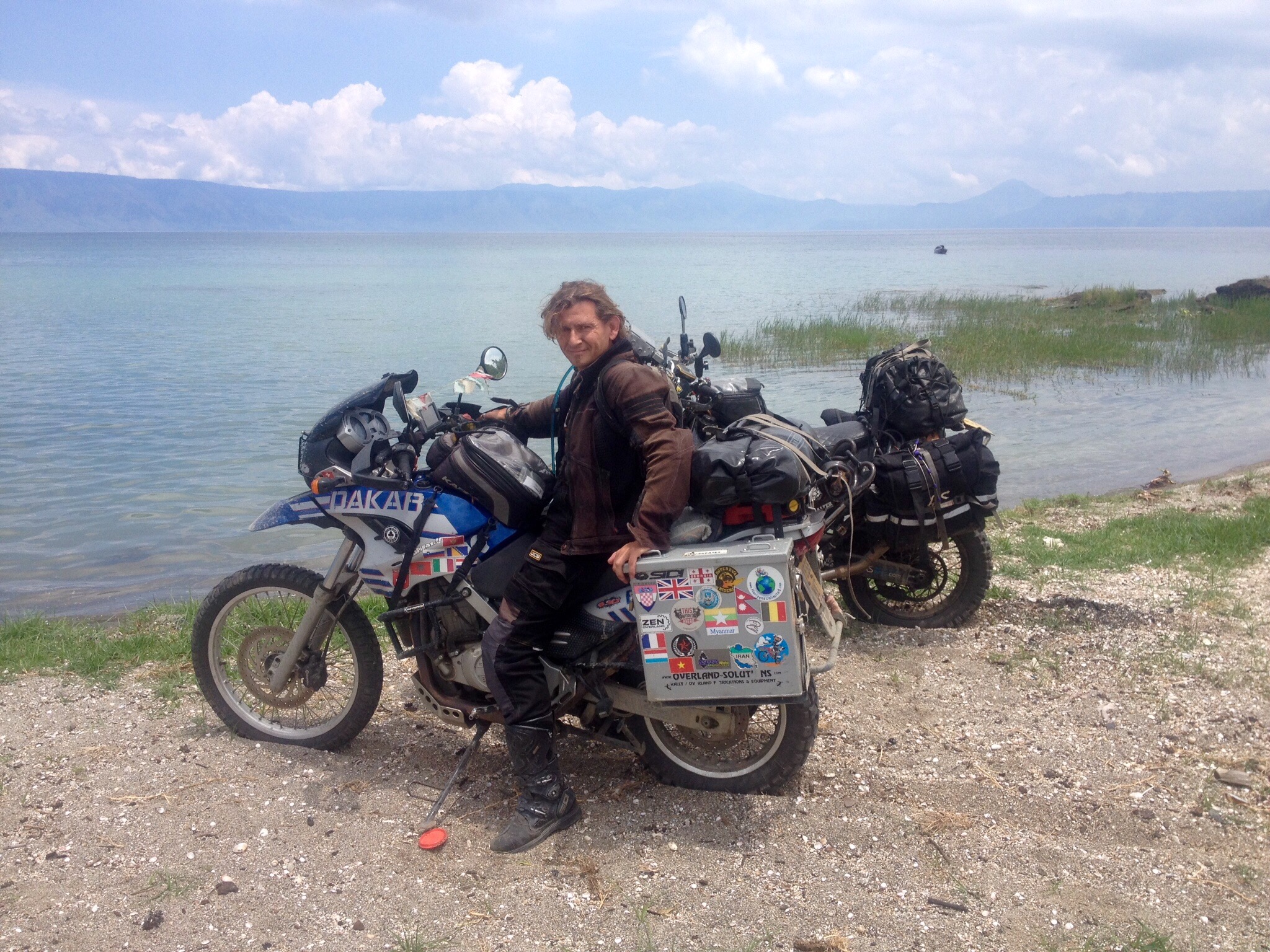 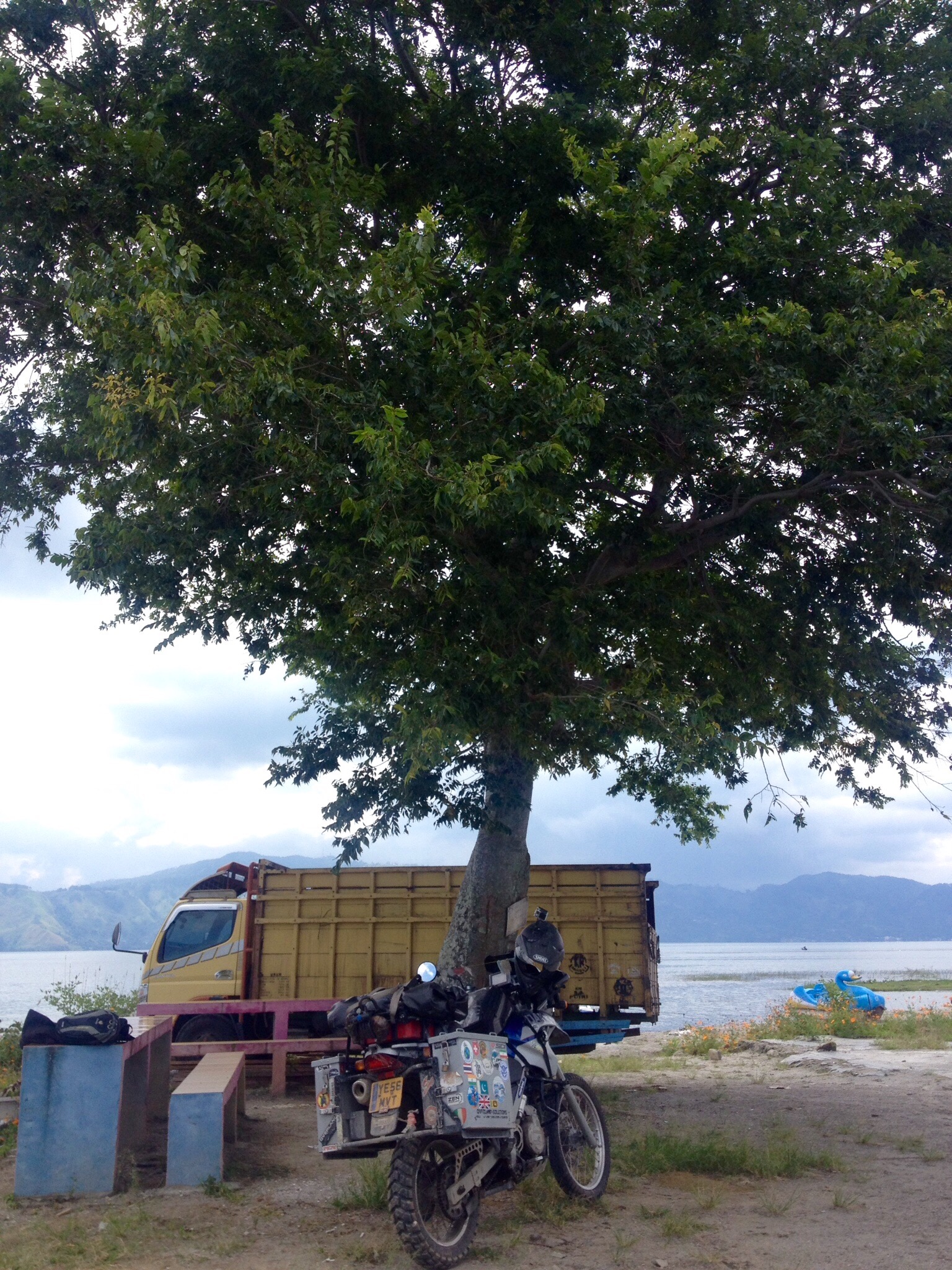 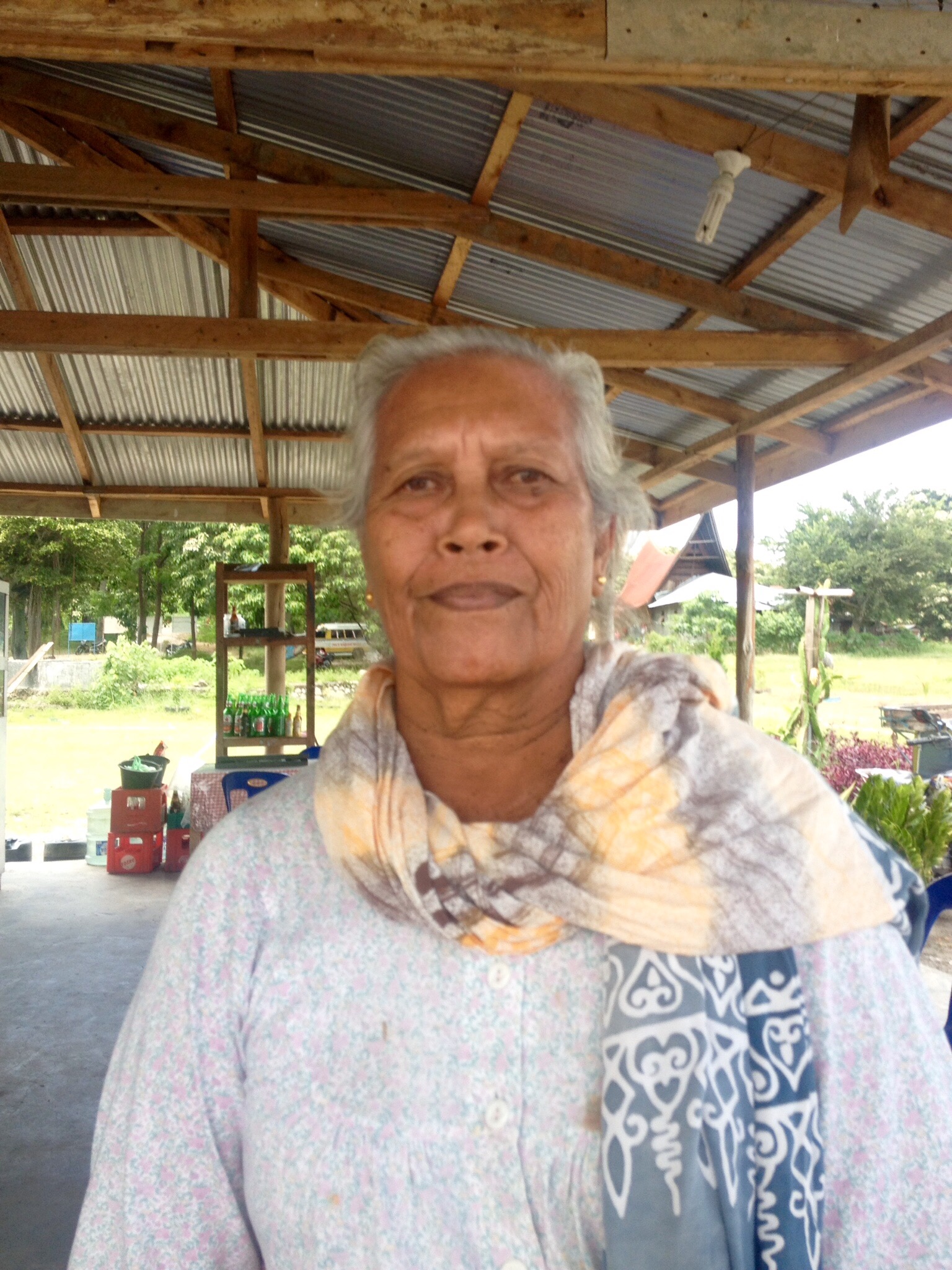 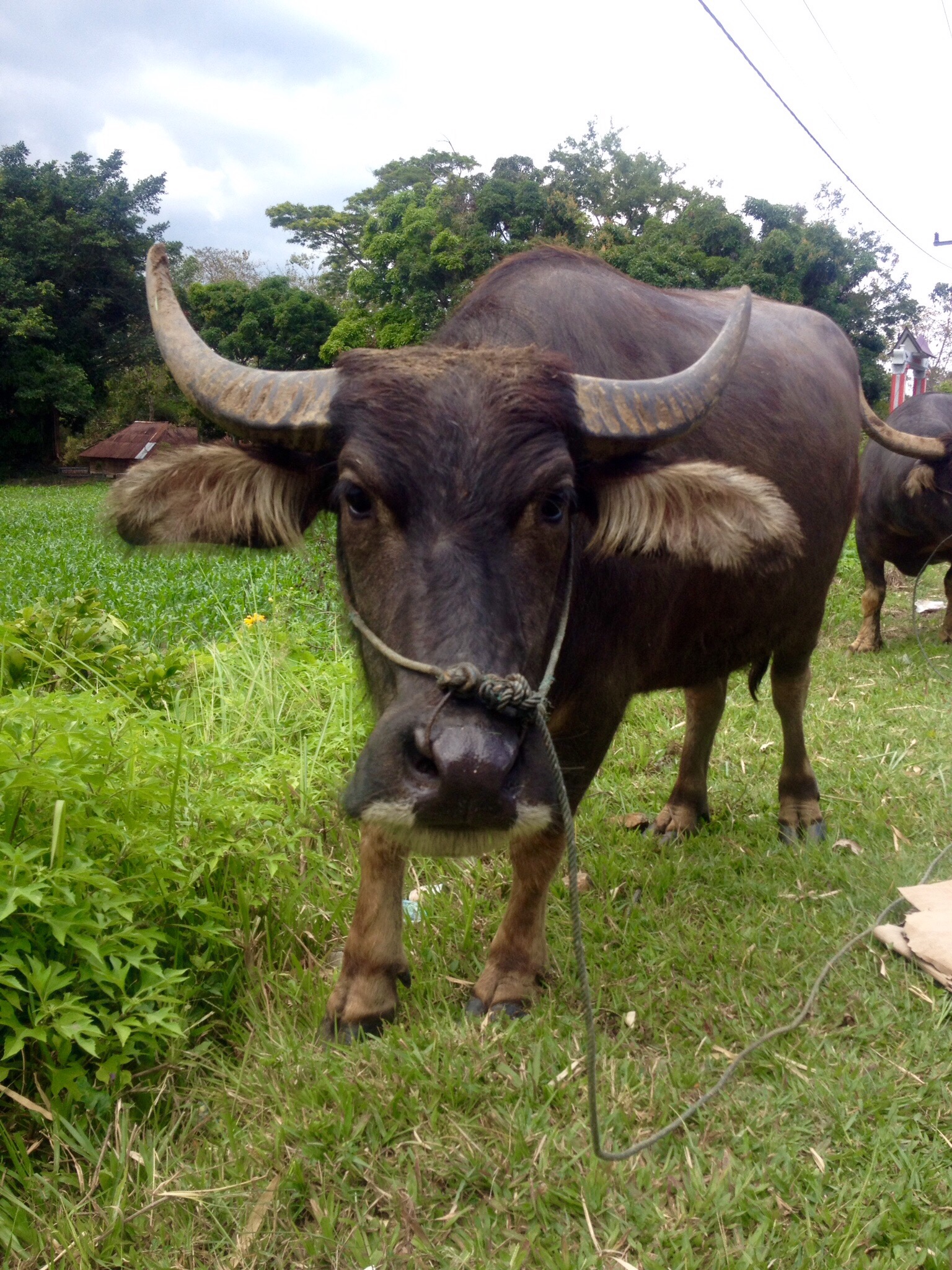 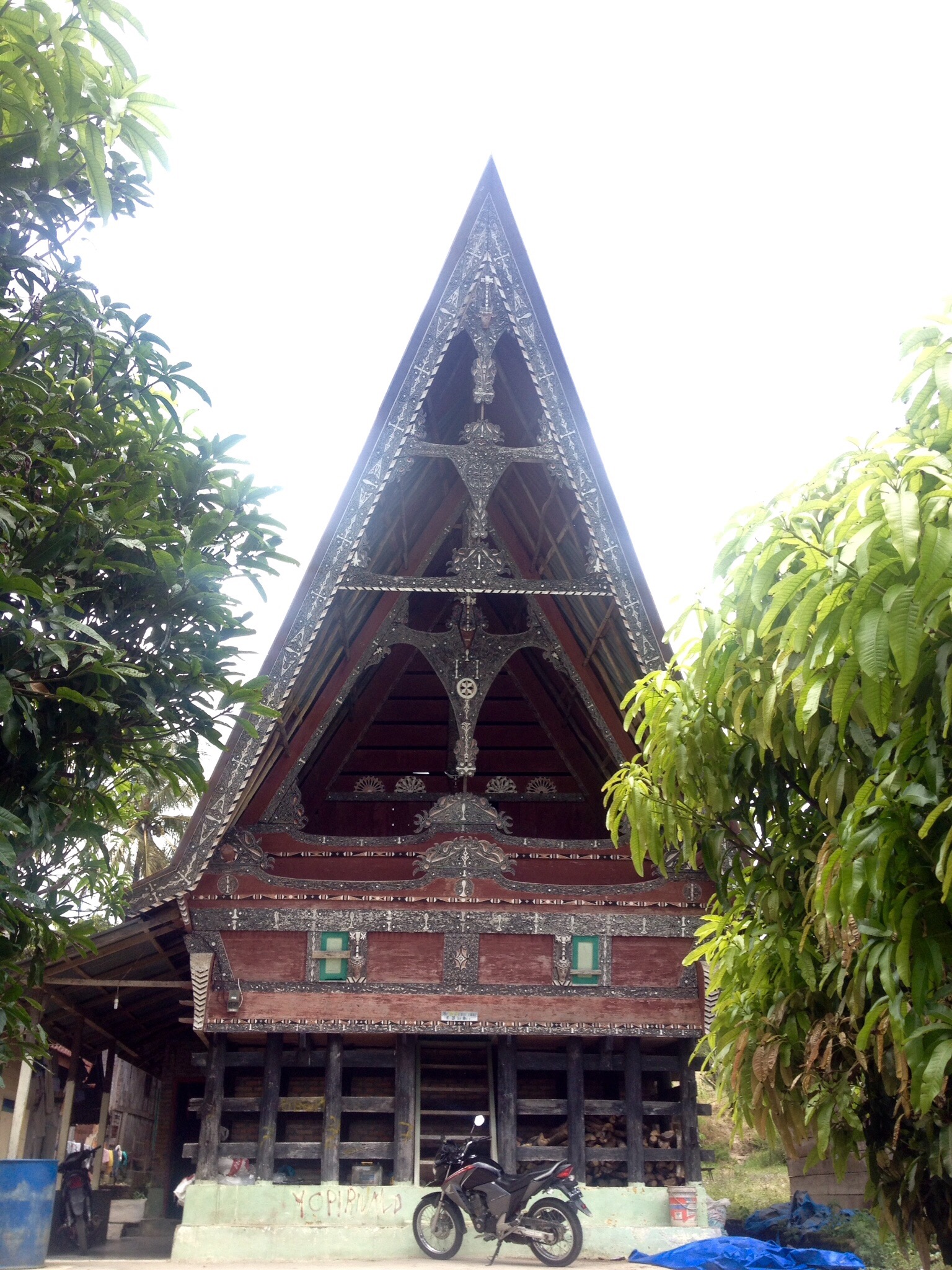 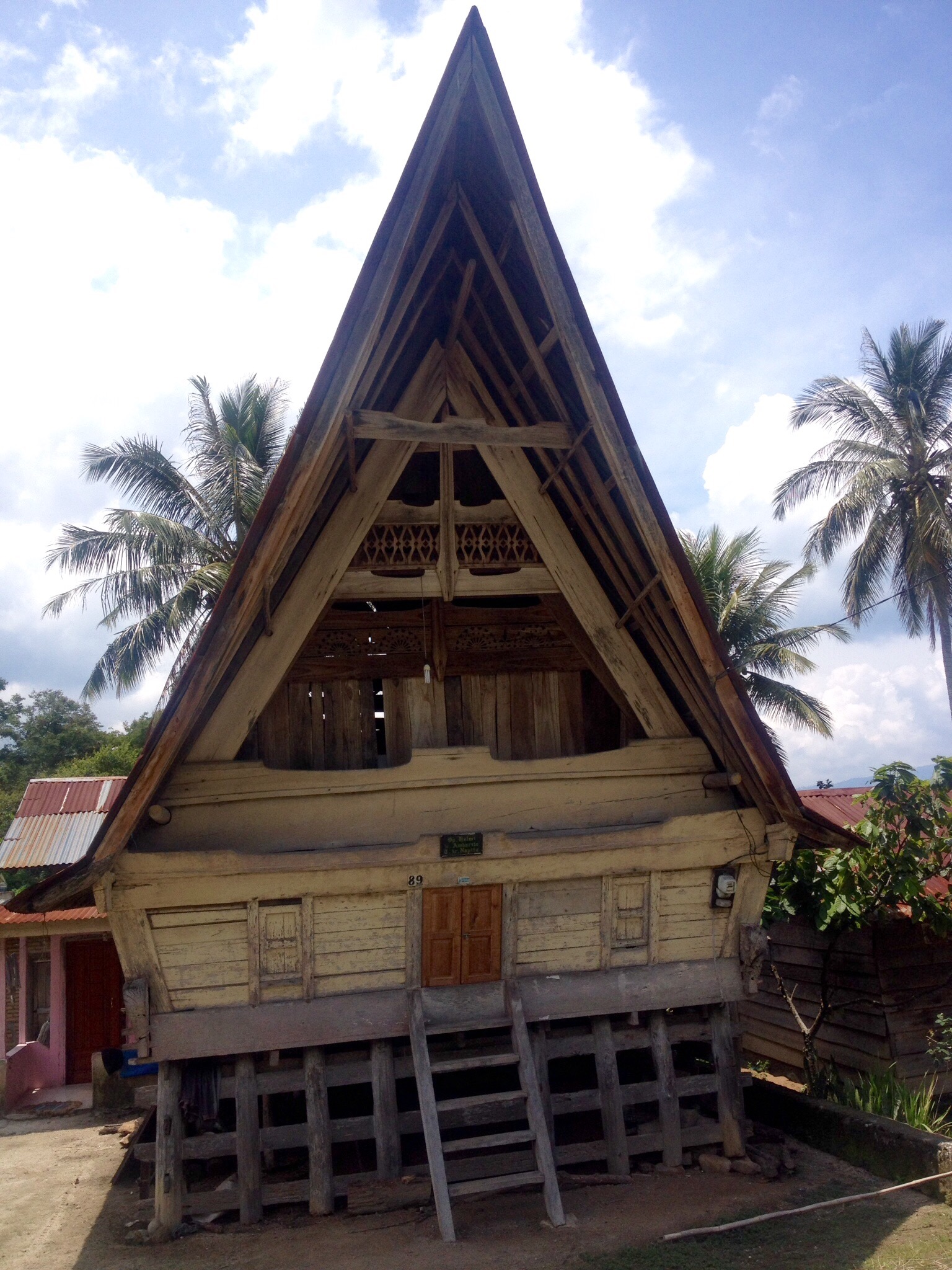 I have lived in Chelmsford, England since I was 14, prior this this I was a country boy having been brought up in a small hamlet in rural Essex. I have two wonderful kids, Beth & Olly and have given my job up and rented my house out to travel the world.
» Blog » Day 381 Medan – Lake Toba... Previous post:
Malaysia – motorbike GS Dakar RTW overland adventure traveller Next Post:
Day 382 Lake Toba – Bukittinggi (Indonesia) / motorbike GS Dakar RTW overland adventure traveller